While in Florence last week, we took the opportunity to travel by bus to Fiesole, a hilltop town just 5 miles to the North East of Florence itself. In particular we wanted to see the Roman Amphitheatre and other Roman ruins there. As mentioned in our previous blog post (about the Ponte Vecchio), we couldn’t help but notice parallels between the features we were discovering in Italy and aspects of The Lost City of London – in this case Roman Londinium. 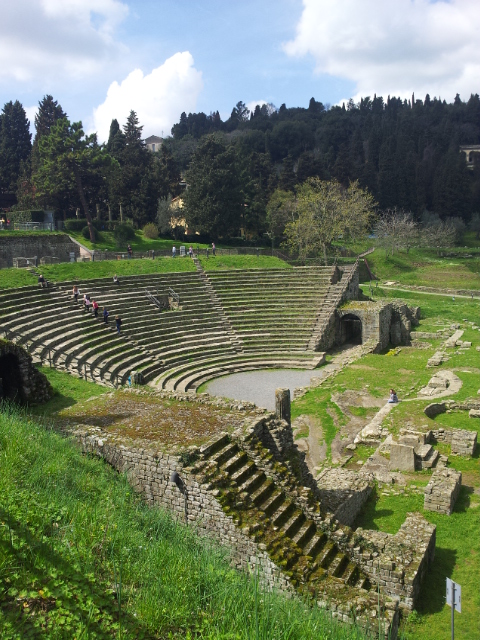 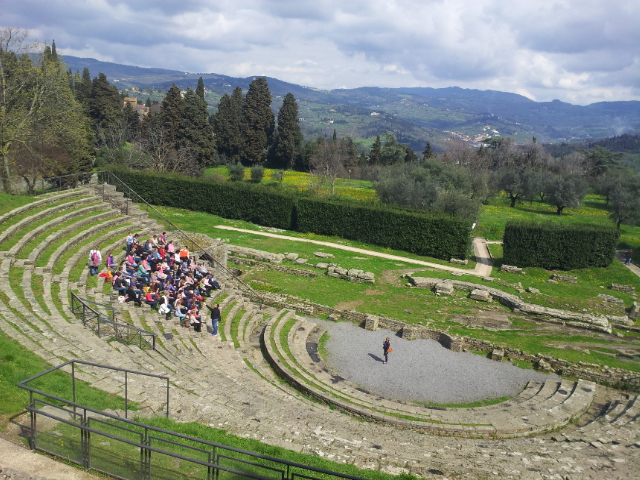 The Amphitheatre in Fiesole has been extensively restored over the years and is very well preserved. Built into the natural rock of a hill, it dates from the first century BC and is situated where the ‘Cardo’ – one of the Roman town’s main streets – once led to the forum. It had a capacity of about three thousand people.

By comparison the Roman Amphitheatre in London  – situated where the Guildhall Yard is today – was about twice as big, with seating all the way round. Built first in timber around 70AD, and upgraded to stone (with timber seating) in about 120AD, it had a capacity of six to seven thousand spectators, in a Roman city with a total population, at that time, of about twenty to thirty thousand. The seating would have been tiered around the performance arena. The Amphitheatre was abandoned in the 4th century AD, and all knowledge of its existence had pretty much vanished until the twentieth century

This significant Roman site was in fact only discovered in the 1980s during excavations prior to the building of the Guildhall Art Gallery. Today a dark circle in the Yard marks the line of the Amphitheatre’s circumference, giving a good sense of its great size.

The basement of the Guildhall Art Gallery (which is normally accessible during the Art Gallery’s opening hours)  houses an atmospheric exhibition space where you can see:

* The remains of the stone walls of the eastern entranceway which led into the arena.
* Part of the wooden drainage system – a rare survival, thanks to the wet burial conditions.
* Remnants of the walls of two antechambers 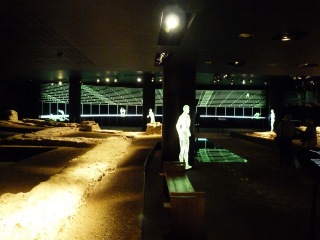