26th September 2013 – I’ve just got back from the premiere of David Goode’s Blitz Requiem, performed by the  Bach Choir and the Royal Philharmonic Orchestra under David Hill, in St Paul’s (it’s interior lit by a thousand candles).
A moving evocation of those darkest of days, when the building itself was a beacon of hope. 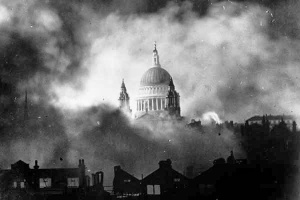