Greenwich was first recorded as Grenewic in 964, as Grenawic in the Anglo-Saxon Chronicle of 1013, and as Grenviz in the Domesday Book of 1086.  It takes its name from the Old English grene, meaning green, in context grassy or vegetated; and wic, meaning trading settlement or harbour.

Greenwich Palace was built here by Henry V’s brother, Humphrey, Duke of Gloucester, in 1426, and rebuilt by Henry VII between circa 1500-06.  The palace is notable as the birthplace of Henry VIII and of his daughters Mary and Elizabeth I.  It was substantially demolished at the end of the seventeenth century to make way for  the Royal Naval College, although some surviving fragments can still be seen in an exhibit in the “Discover Greenwich” Visitor Centre attached to the College.

The College was built by Christopher Wren and Nicholas Hawksmoor between 1692-1728.  It had to be built in two widely separated halves to allow the “Queen’s House” to the rear,  built by Inigo Jones, principally between 1629-40, to remain in the view from the river (leading Samuel Johnson to describe it  as “too much detached to make one great whole”).  The east wing, including the Chapel, was damaged by fire in 1779, and rebuilt by James “Athenian” Stuart, while the west wing, including the Painted Hall, was undamaged.

The Painted Hall, “the finest dining hall in Europe”, was sumptuously decorated by the English artist James Thornhill, who also did the dome of St Paul’s, between 1708-1727.  It features a range of allegorical and symbolic scenes, with various members of the Royal Family, consorting with gods and goddesses, very much to the fore, as well as the Royal Navy.  Thornhill’s painterly  skill is most evident in his rendering of subjects as if in three dimensions through the use of forced perspective (trompe l’oeil).  And evidently he was only paid £3 per square yard for the ceilings, and £1 per square yard for the walls!

The Hall was originally intended as a dining hall for the so-called “Greenwich Pensioners”, who lived at the nearby Royal Hospital for  Seamen, but  was soon deemed to be too good  for them (it appears that they once had a food fight, and got gravy on the paintwork).   Instead, it became something of an up-market tourist attraction, and between 1824-1936 also housed the National Gallery of Naval Art (now housed in the Queen’s House).   It remains open to the public, and is, remarkably, free of charge! 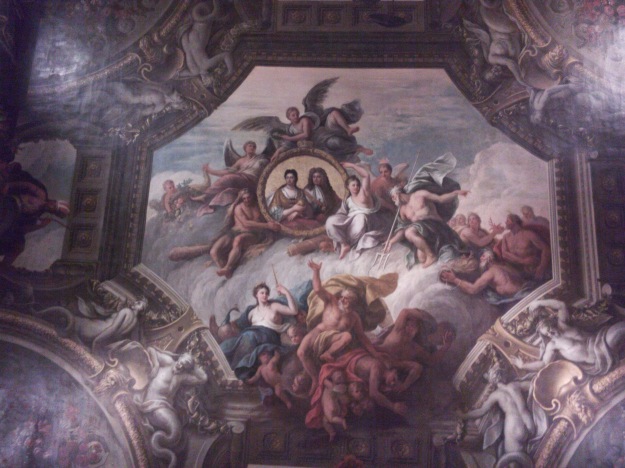 The ceiling of the Upper Hall, featuring Queen Anne and her husband George of Denmark 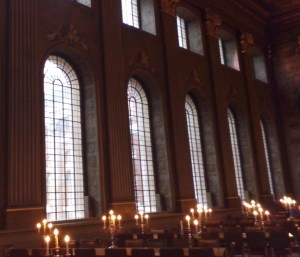 The entrance to the Upper Hall

The west wall of the Upper Hall, featuring George I (reigned 1714-1727) and his children and grandchildren

Detail of the entrance to the Upper Hall, showing the royal and zodiacal motifs on the arch

3 thoughts on “Greenwich Palace and the Royal Naval College, Greenwich”