On 10th March 1613, John Chamberlain wrote in a letter to Sir Ralph Winwood:

“[A]n odd fray … happened much about that time near the Temple, ‘twixt one Hutchison of Grays-Inn and Sir German Pool; who, assaulting the other upon Advantage, and cutting off two of his Fingers, besides a wound or two before he could draw, the Gentleman finding himself disabled to revenge himself by the Sword, flew in upon him, and getting him down, tore away all his Eyebrow with his Teeth, and then seizing on his Nose, tore away all of it, and carried it away in his Pockett”. 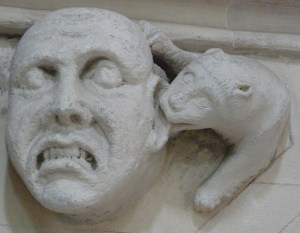 Chamberlain, who lived from 1553/4-1628, and was baptised and buried in the church of St Olave Jewry in the City of London, is best known now as the author of a large number of letters written between 1597-1626, that “constitute the first considerable body … in English history and literature that the modern reader can easily follow”.

Most of the nearly 500 that still survive were written to Sir Dudley Carleton while he  was serving as an ambassador in Venice and The Hague, and were evidently intended to keep the ambitious diplomat abroad  informed  of events – especially those befalling “the better sort of people” – at home  (incidentally, like Winwood,  Carleton went on to become Secretary of State).  The letters  contain descriptions of such  important events in Elizabethan and Jacobean history as the trial of the Earls of Essex and Southampton in 1601, the Gunpowder Plot in 1605, the trial  of the Earl and Countess of Somerset in 1615, and the execution of Sir Walter Ralegh in 1618.  They also contain much court, City and country tittle-tattle (“who’s in, who’s out”), picked up, no doubt,  in St Paul’s Cathedral, which at the time had a reputation as  the fount of all such – it appears that  Chamberlain was an inveterate “Paul’s walker”!