Another in the occasional series on contemporary accounts of events in the history of London, this one from the City of London letter-book of 1372 …

“ … John Mayn, …  who had oftentimes … been commanded … to depart from the City, and provide for himself some dwelling outside it, and avoid the common conversation of mankind – seeing that he, John, was smitten with the blemish of leprosy – … by reason of the infection of that disease … was [ordered] before the mayor and aldermen at the Husting … [to] depart forthwith from the City, and … not return thereto, on pain of undergoing the punishment of the pillory, if he should contravene the same”.

Mayn was one of countless lepers expelled from the City after their presence there was banned under a Royal Edict issued by Edward III in 1346, which read, in part:

“all leprose persons inhabiting … should auoid within fifteen dayes …, and … no man suffer any such leprose person to abide within his house, vpon paine to forfeite his said house, and to incurre the kinges further displeasure”. 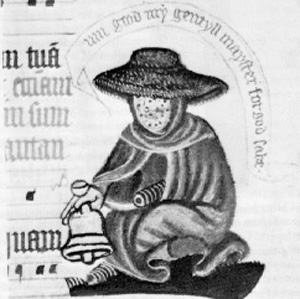 Leper with bell in margins of C14 MS

Seal of the lazar-house, Mile End

Seal of the leper-women of Westminster

There is  no record  of what became of him after he was expelled.  If he was fortunate, he may have found himself a place in one of the leper colonies or hospitals, or “Lazar(us) Houses”,  on the rural fringes of the City, in St Giles (in the Fields), Westminster and Knightsbridge to the west, Kingsland to the north, Mile End to the east, and Southwark to the south.  The “lazar houses” were invariably strategically sited at crossroads, where the  lepers could  beg for alms from  passing pedestrians.

St Giles in the Fields, originally founded as a leper colony or hospital in 1101