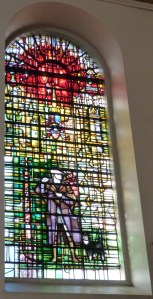 October 30th –  On this day in 1397 Dick Whittington became Lord Mayor of London for the first time (of three).  Among the many public works undertaken by Whittington, in or out of public office, were the acquisition and conversion into a Market of the old Leaden Hall, on Leadenhall Street; the establishment of the College of St Spirit and St Mary, on what is now College Street, where he lived; the reconstruction of the church of St Michael Paternoster Royal, also on College Street; the reconstruction of the Guildhall; the reconstruction of Newgate Gaol at the junction of Newgate Street and Old Bailey, which had been damaged during the Peasants’ Revolt (and of which he had written “by reason of the foetid and corrupt atmosphere that is in the heinous gaol … many persons are dead who would have been alive”); and the bequest of a library valued at £400 to Christ Church Newgate Street.  Not to mention the construction of a 128-seater public lavatory! 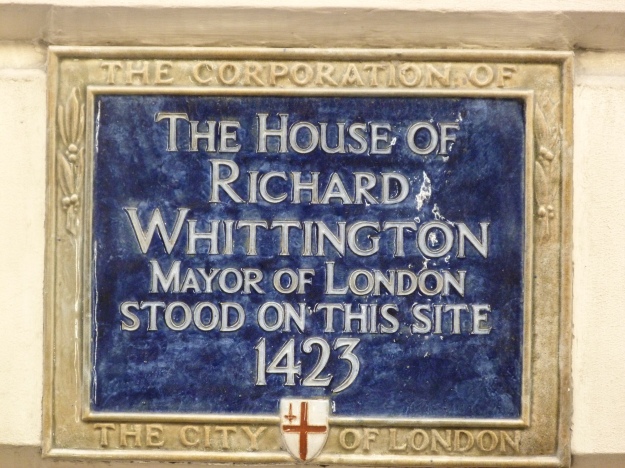 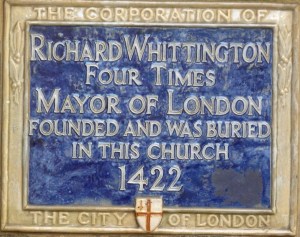 Unfortunately, most of the sites associated with Whittington were destroyed during the Great Fire of 1666.  However, he is commemorated by a Corporation “Blue Plaque” on the site of his house on College Street, by another outside the church of  St Michael Paternoster Royal,  and  by a stained glass window inside the church, depicting him and the non-existent cat that is nonetheless forever associated with him, through the fable and pantomime. The cat  is commemorated by a statue on Highgate Hill, looking back over its shoulder toward the City paved with gold….. 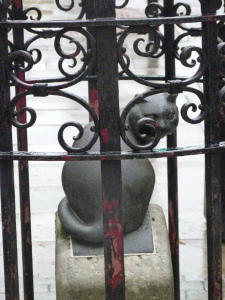 Probably the world’s only statue of a non-existent cat, Highgate Hill 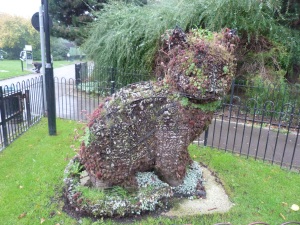 And this is probably the world’s only piece of topiary in the form of a non-existent cat (looking a bit bedraggled), Whittington Park, Upper Holloway