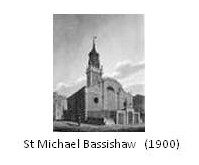 St Michael Bassishaw was originally built in around 1141, and rebuilt in the fifteenth century.  It was burnt  down in the Great Fire of 1666, and rebuilt by Wren in 1676-9, only to be allowed to fall into disrepair, and to be declared an unsafe structure in 1892, and demolished in 1900, when the parish was merged with St Lawrence Jewry.

A Corporation “Blue Plaque” marks the former site of the church.   The weather-vane salvaged from the church still survives, atop St Andrew-by-the-Wardrobe.  An early nineteenth-century painting of the church by William Pearson also survives,  in the Guildhall Art Gallery. A “Museum of London Archaeology Service” monograph  deals with the finds from the church. 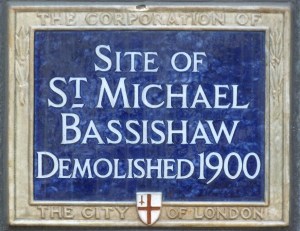 Blue Plaque at the site of the church, near the Guildhall