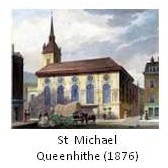 St Michael Queenhithe was originally built in the twelfth century. It was burnt down in the Great Fire of 1666, and rebuilt by Wren in 1676-86, only to be demolished in 1876, when the parish was merged with St James Garlickhythe.

Essentially nothing now remains of the church on its former site, although there is a parish boundary marker in Little Trinity Lane. The choir stalls and pulpit salvaged from the church still survive, in St James, and the weather-vane in the shape of a ship, on top of St Nicholas Cole Abbey. The font also survives, in the church of St Michael in Camden Town. 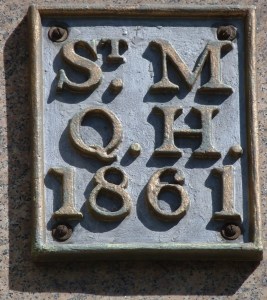