The church of St Etheldreda in Ely Place, off Holborn Circus, was originally built as a private chapel in Ely Palace – owned by the Bishops of Ely –  in  around 1293, possibly on the site of an earlier structure, and pressed into service as an Anglican church after the Reformation.  It was undamaged  in the  Great Fire of 1666, although it has been somewhat modified subsequently.  It was “restored to the old [i.e., Catholic] faith” in 1874.

The interior contains a number of memorials to Catholic martyrs, including John Houghton, Prior of Charterhouse, who was hanged, drawn and quartered  at Tyburn in 1535 for challenging King Henry VIII’s  supremacy over the Church. The exterior is a rare, restrained and fine surviving example of the Decorated Gothic style of ecclesiastical architecture.  The church is easily overlooked on account of its tucked-away location (and small size).  Etheldreda was the Abbess of Ely in the seventh century. There is a chapel dedicated to her in Ely Cathedral.

The decorated Gothic exterior of the church of St Etheldreda 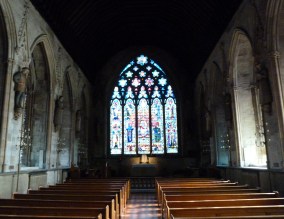 The interior of the church, with effigies of Catholic martyrs on the walls 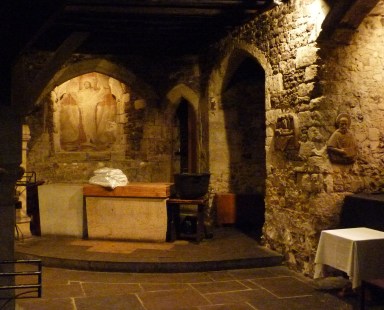 Reconstruction of Ely Palace (in the Crypt of St Etheldreda)