Another in the occasional series on “Far-Flung Lost London” (for further details of which, the reader is referred to Nick Barratt’s Greater London”, newly available in paperback) …

Harmondsworth was first recorded in the eighth century, in an Anglo-Saxon charter of 781.  It takes its name from the Old English personal name Heremund, and worth, meaning enclosed settlement.  At the time of the Norman Conquest of 1066, the manor was the property of the English King,  Harold II, and after his death at the Battle of Hastings in  October of that year passed to William I.   In 1069, it  was granted by William I   to the Abbey of La Sainte Trinite du Mont in Rouen, and at least as long ago as the thirteenth or early fourteenth  century a house was built there accommodate a  Prior, who managed the manorial estate, and sent its revenues to France.   In 1391, by which time England and France were at war (again), the manor was acquired by the Bishop of Winchester, William of Wykeham, essentially on behalf of the then newly-founded  Winchester College. 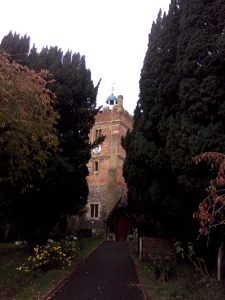 The church of St Mary  was originally built  in  the Norman period, in the eleventh century, although it has been substantially modified subsequently.  The surviving Norman, or Romanesque, doorway is elaborately decorated, like that of St Peter and St Paul in Harlington.

The Great Barn was originally built in the fifteenth century, around 1425-7, as indicated by documentary evidence in the archive of Winchester College, and by dendrochronology (tree-ring dating).  It was mainly used to store cereal crops before threshing, right up until the 1970s, and was bought by English Heritage in 2011.  At nearly 200’ long and 40’ wide, it is largest surviving Medieval timber-framed barn in England, and one of the largest ever known to have been built.