Crofton Roman Villa in Orpington in Kent, the only surviving one in a Borough of London, was evidently originally built sometime in the mid-part of the second century, subsequently rebuilt around the turn of the second and third, and remodelled and partially abandoned – in response to declining local fortunes – in the late third, before being eventually entirely abandoned around the turn of the fourth and fifth.    Probably not long after its final abandonment, the site became buried by hill-wash, and was only re-discovered during the construction of a drive in 1926 (at which point it became apparent that substantial damage had been unknowingly done to it  at this time and also earlier, during the  construction of a railway cutting  in the nineteenth century).  Partial archaeological excavations of the villa were undertaken in the 1920s and  1950s, and a fuller programme in 1988.  Following the  1988 excavation, the importance of the villa  finally became recognised, and work began to preserve it.  Substantial parts of the villa, measuring approximately 40x15m, may now be viewed in a cover-building put up between 1990-92.    The outside walls of the villa were  stone-built; its windows glazed; and its roof tiled.  At least some of the inside walls of its total of sixteen rooms of varying time-periods were plastered and painted, and at least some of its  floors tessellated, and heated by hypocausts (it has also been speculated  that there may have been a heated bath-house either attached to  one or other of the damaged ends of the villa or in a detached annex).  Important  small finds from the villa site, of which many of which are on display on site, include several thousand pot-sherds, some local, and some others imported from Gaul, the Rhineland or the Mediterranean; and comparatively few coins, the latest dating to the emperorship of Arcadius (395-408). 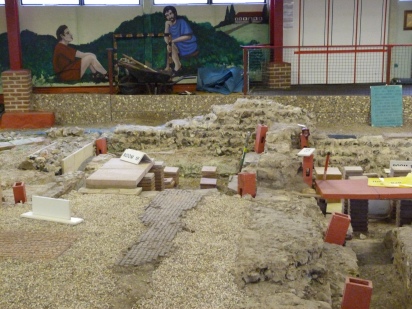 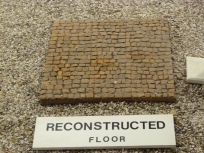 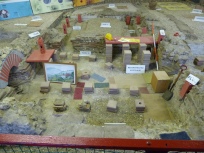