Orpington was first recorded in 1032 as Orpedingtun, meaning  a  farmstead or  estate once owned by a Saxon man called Orped.  It remained rural  until the nineteenth century, when the railway came, and it was swallowed up by (sub)urbanisation.

The present church of All Saints was originally built here, on the site of an earlier, Saxon church, in the early twelfth century, although it has subsequently been much modified, most notably in the thirteenth and fourteenth centuries, and again in the twentieth, between 1957-58.  The surviving tower is thirteenth-century, the west porch fourteenth-century.  Built into one of the pillars of the south wall of the interior of the church are  the remains of a rare Saxon sundial, unearthed when the twentieth-century extension was being built. 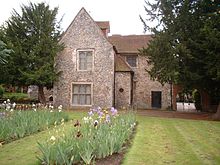 Orpington Priory, a  Medieval hall house, was originally built here in the eleventh century, on land given by King Cnut’s chaplain, Eadsy, to Christ Church Priory, Canterbury, in 1032. It was subsequently rebuilt in the thirteenth century, and extended in the fourteenth, and again in the fifteenth, before passing into private ownership in the seventeenth.  It was acquired by Orpington Urban District Council in 1947, and housed a local museum until 2015.