Merton was first recorded in a Saxon charter of 949 as Mertone, meaning farmstead or estate (tun) by the pool (mere) (in context, either on or near  the River Wandle).   A large Augustinian priory was built here in the Medieval  period, which survived until the post-Medieval.

Huguenots settled the area in the sixteenth century, and set up cottage industries on the banks of the Wandle.  Liberty then set up their print-works on the same spot in the eighteenth century, and William Morris his workshop in the nineteenth.  The modern town developed during the late nineteenth century, in part as a garden suburb founded by the successful local businessman John Innes – he of compost fame! 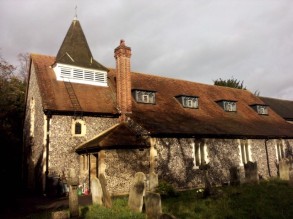 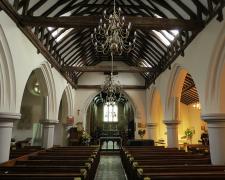 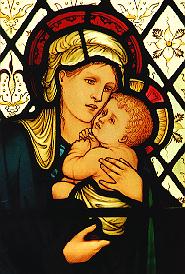 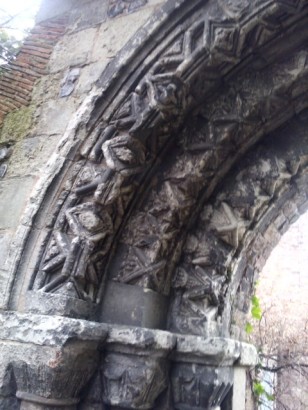 The church of St Mary was originally built here, by the same Augustinian canons who built Merton Priory nearby,  and at the same time, in the early twelfth century, around 1117.  It has been much modified subsequently, but parts of the nave still survive from the twelfth century, parts of the chancel from the turn of the fourteenth and fifteenth, and some of the stained-glass windows from the fifteenth (and beside the entrance  is a Norman arch  salvaged from Merton Priory).  There is also a  surviving post-Medieval memorial to Gregory Lovell, “Cofferer of her Majesties household”, who acquired much of Merton Priory’s land and property after it was dissolved in 1538, and who died in 1597.  In the churchyard is the grave of William Rutlish, embroiderer to Charles II, who died in 1687.