Mitcham was first recorded in 727 as Micham, and in the Domesday Book of 1086 as Michelham, from the Old English micel, meaning large, and ham, meaning homestead or village.   It was evidently originally settled even earlier, though, there being here not only a large Anglo-Saxon pagan cemetery dating to the late fifth to sixth century, but also the remains of Roman and even Prehistoric farmsteads.

In the early post-Medieval period, Mitcham became popular among the wealthy as a place in which to build rural retreats, and Elizabeth I is known to have been entertained here a number of times in the late sixteenth century.   Industrialisation may be  said to have begun  in the seventeenth century, with the establishment of calico bleaching and printing works here, although until as late as the eighteenth to early nineteenth, the cultivation of herbs was also to remain an important activity.  Urbanisation did not really begin until after the arrival of the tramway in the late nineteenth century, and the last of the market gardens remained until the mid-twentieth.  Mitcham is now part of the London Borough of Merton. 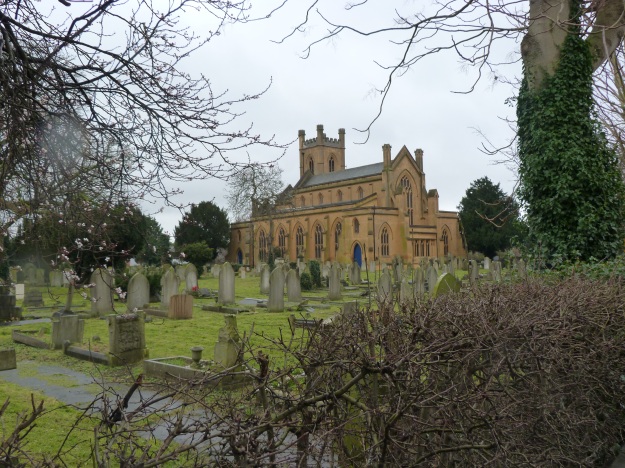 The church of St Peter and St Paul was originally built at least as long ago as the thirteenth century, circa 1250, and possibly as long ago as the Saxon period.  It was subsequently substantially rebuilt in the early nineteenth century, between 1819-22,  by the local master-craftsman John Chart, to the design of George Smith.  Essentially only the base of the tower still survives from the Medieval church.