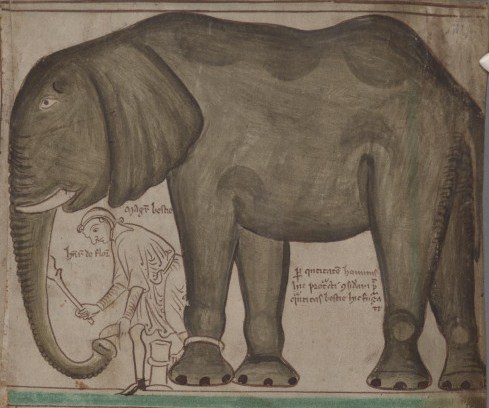 On this day in 1255 Louis IX of France presented to Henry III one of the wonders of the age, an African elephant, to exhibit in the Royal Menagerie in the Tower of London.  Surviving records indicate that transporting the elephant to the Tower cost £6 17s 5d; building  a special house for it there,  measuring 40’  long by 20’ wide, more than £22; and keeping it for the nine months between December 1255 and September 1256, £24 14s 3½d – and all this at a time when a knight could live comfortably for a year on £15.

The elephant even had its own keeper, one Henri(cus) de Flor.  Unfortunately, it appears that he gave it  red wine to drink, a surfeit of which eventually killed it, in 1257.  The poor creature was buried in the Tower in 1258.  A   request was later made for its bones  to be dug up and given to the Sacrist of Westminster Abbey “for doing with them what the king had instructed him”.   Sadly, there is no surviving record of what became of this request!

The menagerie was eventually closed down in the nineteenth century by the then Constable of the Tower, the Duke of Wellington, who did not want it interfering with military matters any longer.  The animals were rehomed in  Regent’s Park, in what was to become the zoo there.