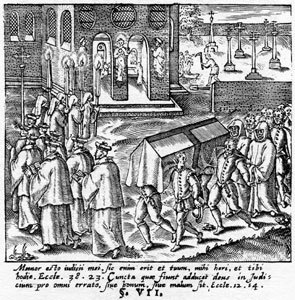 “One master Lynsey armourer dwelling in Bishope-gate street did hang himself in a privy house for he had his office taken away from him … .  The same day there was a maid dwelling in Hay lane … did fall out of a window and break her neck.  The same day … in saint Martens there was a woman dwelling there took a pair of shearers for to have cut her throat, but she missed the pipe in her … madness, and … a day after … died … ”.

Machyn, who lived from 1496/1498–1563, was  a merchant-taylor or clothier but is now best known as a diarist or chronicler.  His  Diary, written between 1550-1563, contains descriptions of such  important events in Tudor history as the Reformation, and the conversion of the country to Protestantism, under Henry VIII, and the reversion to Catholicism under Henry’s daughter Mary.  Judging from his actions, as well as from  the tone of the Chronicle, Machyn would appear to have been at least  a closet Catholic.  In 1561, he committed the sinful act of “spyking serten [slanderous] words against Veron the [Protestant] preacher”, for which he paid penance at St Paul’s Cross.