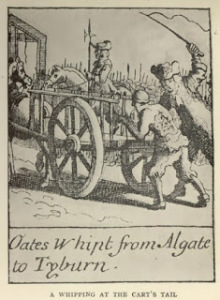 Charles Wriothesley (*) wrote in his “Chronicle of England during the Reigns of the Tudors …”  that on this day in 1545:

“Hugh Weaver, a fishmonger … , was whipped at a cartes arse about London, with a paper set on his head,  for misusing the mayor … and strykinge his officer … ; and allso had after that longe prisonment in the Counter for the same”.

(*) Wriothesley, who lived from 1508-1562, was a herald at the College of Arms in the City of London as well as a chronicler.  He is buried not in the church of St Giles-without-Cripplegate, alongside  other members of the Wriothesley family, but in St Sepulchre-without-Newgate.