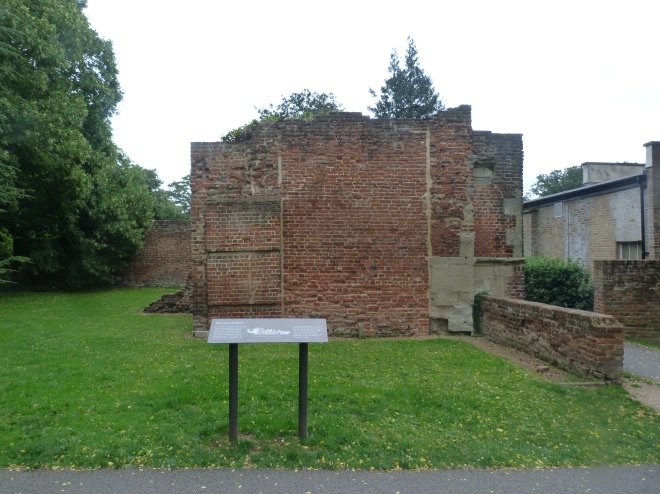 A “prodigy-house” called  Theobalds House was built at the heart of a Hertfordshire park-estate in 1564-85, by William Cecil, 1st Baron Burghley, one of Elizabeth I’s most trusted advisers (the queen is known to have visited him here on a number of occasions).  After William’s death in 1598, it passed to his son Robert Cecil, 1st Earl of Salisbury; in 1607, to James I; and after James’s death here in 1625, to his son Charles I.   It was substantially demolished in 1650, during the Commonwealth that came into being after Charles’s  execution in 1649.  Some  romantic ruins remain.

A new house called The Cedars was built, a little to the north-west of Theobalds House, in 1762, by the then owner, George Prescott (the estate in the meantime having  had passed through the hands of the Dukes of Albemarle, who were granted it  after the Restoration of the Monarchy, and the Earls of Portland).  The house later passed through the Prescott family, and thence, in 1820, to the Meuxes  (*).  When Hadworth Meux died in 1929, it  became in turn a hotel, a school, and adult education centre, and a conference centre, and as of 2015 is once more a hotel.

(*) The Meuxes, of brewery fame, made extensive alterations and added extensions to the house during the nineteenth century.  In 1888, Lady Meux, a banjo-playing former barmaid, re-erected at its  entrance Christopher Wren’s Temple Bar, a gate-house that had  formerly stood between Fleet Street in the  City of London and the Strand in Westminster (until it had to be taken down to allow for the free flow of traffic).  Temple Bar was moved again in 2004, this time  back to the City of London, to Paternoster Square, just north-west of St Paul’s Cathedral.