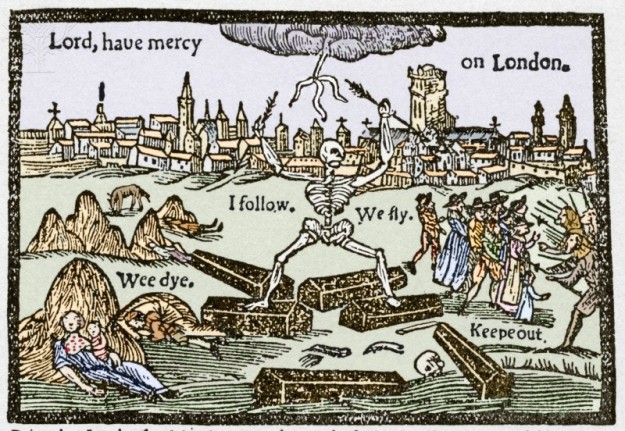 “[T]o my great trouble, hear that the plague is come to the City, though it hath … since its beginning, been wholly out of the City; but where should it begin but in my good friend and neighbour’s, Dr Burnett, in Fenchurch Street: which, in both points, troubles me mightily”.

The 1665 outbreak of Bubonic Plague – the “Great Plague” – killed at least 70000 people in London, and possibly as many as 100000 – far more than the “Black Death” of 1348-9, although far fewer in proportion to the overall population.  The “Bills of Mortality” show that of the 70000 recorded Plague deaths, only 10000 were in the 97 parishes within the walls of the City  – possibly because a significant proportion  of those inhabitants who could afford to do so had fled to the country.  The remaining 60000  Plague deaths were in the 16 parishes without the walls, the 5 in Westminster, and the 12 in Middlesex and Surrey.  Stepney was the worst affected, with 6500 deaths.

Bubonic Plague was diagnosed by painful swellings or buboes in the groin or armpit.  It is now known to be caused by the bacterium Yersinia pestis, in turn generally transmitted by the bite of an infected  rat-flea of the species Xenopsylla cheopis  (such as was common in the conditions in which people, livestock, pets and vermin  lived, cheek-by-jowl, in London in the Medieval to post-Medieval period).   In the Medieval to post-Medieval period, it was thought to be spread by cats and dogs, which were therefore rounded up and killed in large numbers (the resulting  reduction in predation ironically allowing rats to proliferate).  The 1348-9 outbreak, now referred to as the “Black Death”,  caused so many deaths in such a short time that epidemiologists suspect that it was a particularly deadly and infectious – possibly pneumonic or septicaemic – strain  of the disease,  capable of being passed directly from infected person to person without the involvement of the vector flea.  Perhaps significantly in this context, the “Black Death”  was able to continue to spread and even to spike over the winter of 1348-9, when the vector flea would have been inactive, as it is everywhere  today at temperatures of less than 10degC.