The merchant-adventurer, privateer and naval commander Sir Martin Frobisher died on this day in 1594, of wounds sustained in a naval action against the Spanish (he was  knighted for his service in seeing off the Spanish Armada in 1588).

Frobisher had previously set sail on board the “Gabriel” from Ratcliff in 1576 on the second of three ultimately unsuccessful voyages in search of the North-West Passage to China, returning from Canada with a cargo of what turned out to be worthless “fool’s  gold”. 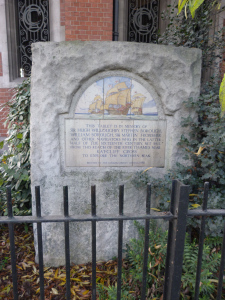 The site in Ratcliff is marked by a “London County Council” plaque of 1922 in King Edward Memorial Park.