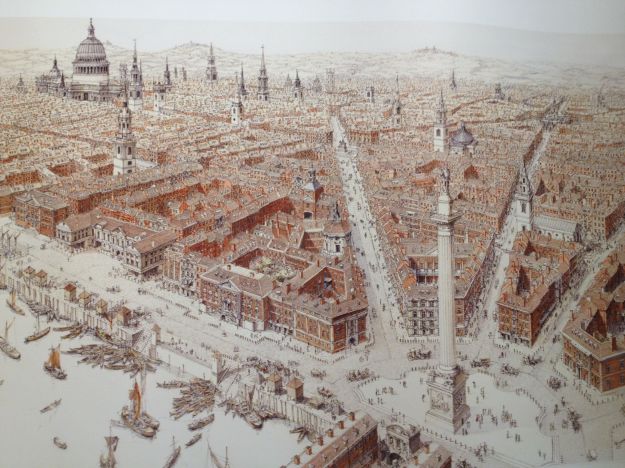 On this day in 1926, Vita Sackville-West wrote, in a letter to Virginia Woolf:

“  … What I think of when I walk down the Strand is: how fine this would have been if Wren’s plans for rebuilding London after the Great Fire had been adopted.  Steps to the river, and all that – and a broad thoroughfare … ”.

Wren’s grandiose plans for the redesigning of the layout of London after the Great Fire of 1666, if fully implemented,  would have given it a radically new look and feel, much more like  that of the great European cities of the day, with their uniform architecture, broad boulevards and open piazzas.  But they  were soon essentially abandoned on the grounds of practicality and expendiency in favour of  one involving much less legal wrangling and groundwork, and much more like the old one.   Note also that, according to the Earl of Clarendon, “[V]ery many, with more expedition than can be  conceived, set up little sheds of brick and timber upon the ruins of their own houses, where they chose to inhabit rather than in more convenient places, though they knew they could not long reside in those new buildings”.  So in some ways the City that might have been never came to be, and  that that had been would come  to be again:  for the most part neither  particularly beautiful nor harmonious, but, rather,   “lived in”  and fractious; and yet, familiar and loved.