As noted in the post of July 7th, what is now known as West Wickham was first recorded in an Anglo-Saxon charter of 973 as Wic hammes gemaeru, meaning “boundary of the homestead associated with the vicus”; and later as Wicheham in the Domesday Book of 1086, as Wicham in 1231, and as Westwycham in 1284.  It was clearly settled at least as long ago as Roman times, but remained sparsely populated until after the arrival of the railway in 1882.  Even to this day, it retains something of a rural character, especially to the south.  Note, though, that is is technically part of the London Borough of Bromley.

The church of St John (the Baptist) was probably originally built here in the Saxon period,  rebuilt in the later Medieval, and rebuilt again in the early Post-Medieval, in the reign of Henry VII (1485-1509), by Sir Henry Heydon, a lawyer and Justice of the Peace, who married  Anne Boleyn, the great-aunt of the future queen of the same name.   There are some surviving Medieval to Post-Medieval memorials in the interior, including one to William de Thorp, a one-time rector (d. 1407), and another to Sir Samuel Lennard (d. 1618), another  lawyer and Justice of the Peace (also a Member of Parliament), and the husband of Elizabeth Slayne (daughter of Sir Stephen Slayne, another one-time Lord Mayor of London). 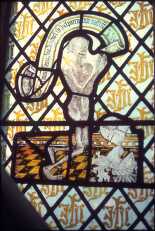 There are also some particularly fine stained-glass windows, believed to be by Anglo-Flemish artists.

A manor house was built here in the early Medieval period, and rebuilt in the late, between 1469-1480, also by Sir Henry Heydon.  In the   Post-Medieval period, it entered the possession of the Lennard family.  In 1935, it was sold and adapted for use as a hotel, and it is currently  a preparatory school, named  Wickham Court.  Some original features survive.