On the brow of Shooters Hill, just under half a mile north of the water tower, and accessed by way of Shrewsbury Lane and Plum Lane,  is a Bronze Age burial mound known as the Shrewsbury Tumulus.  It is the only  one of a number of tumuli discovered in the 1930s to survive. 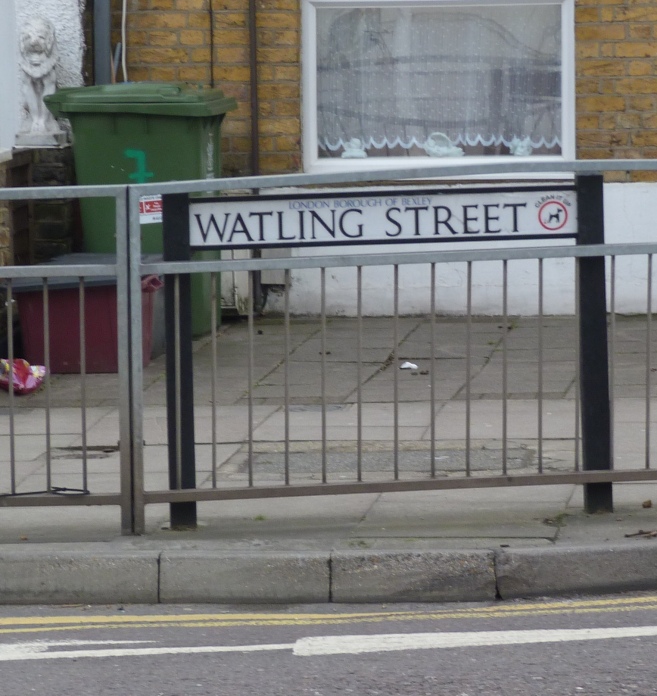 From Shooters Hill, the old Roman road of Watling Street runs essentially due ESE through Welling, Bexleyheath and Crayford to Dartford (and beyond). 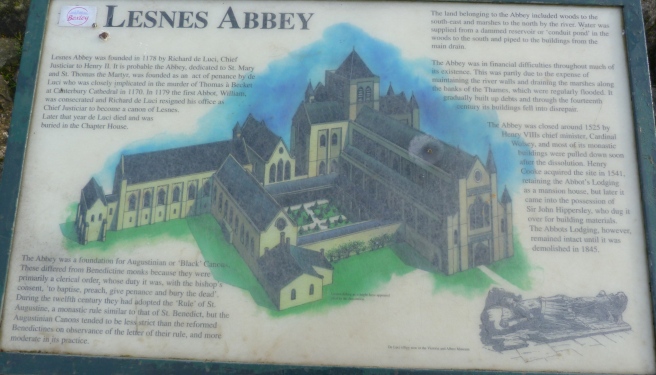 A couple of miles north of the road as it approaches Welling, and accessed by way of the Green Chain Walk,  are the ruins of Lesnes Abbey.

Lesnes Abbey  was founded by one Richard de Luci, Chief Justiciar to Henry II, in 1178, and dedicated by him to St Mary and St Thomas the Martyr, possibly as penance for his, Richard’s – indirect – involvement in Thomas Becket’s murder in Canterbury Cathedral in 1170.  The first abbot, William, was consecrated in 1179, the by-then canon Richard de Luci dying that same year and being buried in the Chapter House.  The abbey was originally an Augustinian foundation, but under the second abbot, Fulc’s incumbency between 1187-1208 adopted the Rule of Arrouaise.  It always struggled financially to meet its running costs, which included those of maintaining its  river walls and draining its marshy  land-holdings, and, in consequence, its  buildings  began to fall into disrepair in the fourteenth century.  The abbey was eventually closed down by Cardinal Wolsey  in 1524, in other words some years before the Dissolution of the Monasteries beginning in 1536.  Most of its buildings were at least partially pulled down in the sixteenth century (some of the salvaged stone being used in the construction of Hall Place in Bexley), although the former Abbot’s Lodgings survived intact and in use until the nineteenth.  Only picturesque ruins remain today.

Welling was first recorded in 1361 as Wellyngs, alluding  either to the Willing family, who owned land here in the fourteenth century, or to the presence of springs here.

Around half a mile north of the road as it passes through Welling, and accessed by way of Upper Wickham Lane, is East Wickham, first recorded in 1240 as Wikam, meaning, in Old English, homestead (ham) associated with a vicus, or  earlier Romano-British settlement (wic). 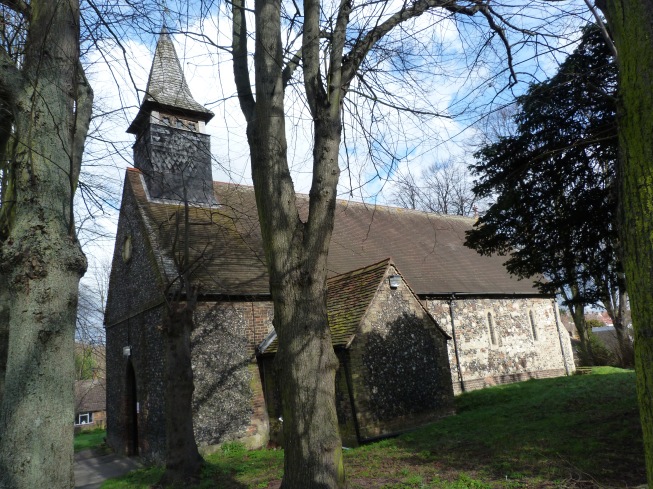 What is now the Greek Orthodox Church of Christ the Saviour was formerly a chapel of ease attached to the church of St Nicholas in Plumstead.  It is believed to have been built in the thirteenth century.

Around  a mile south of the road as it passes between Bexleyheath and Crayford, and accessed by way of the A220, is Bexley, first recorded in an Anglo-Saxon charter of 814 as Byxlea, from the  Old English byxe, meaning box tree,  and leah, meaning clearing.  From the ninth century until the Reformation of the sixteenth, it was a manor of the Archbishop of Canterbury.  In the “Domesday Book” of 1086, Bexley Village was recorded as home to three (?water) mills (?on the River Cray, a tributary of the Thames), as well as a church. 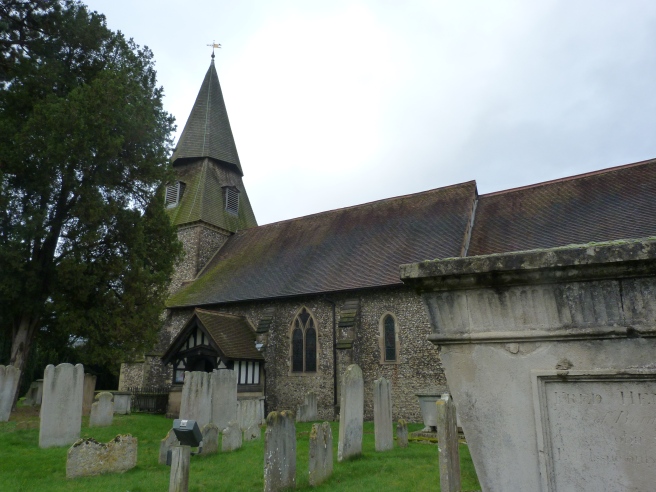 The church, St Mary, with its striking octagonal shingled  tower, was originally built at least as long ago as the eleventh  century, although “each generation since has left its visible mark on the fabric”. The present nave, chancel and west tower were built toward the  end of the twelfth century.  The north aisle was added in the thirteenth century, and extended to accommodate a Lady Chapel at the turn of the fourteenth and fifteenth.  The whole fabric of the church was  restored in the late nineteenth century.

Among the many memorials in the church are them are an unusual “Hunting Horn” brass one, believed  to be to Henry Castilayn (d. 1407); another brass  one,  to John Shelley of Hall Place (d. 1441) and his wife Joan; and a highly decorated carved stone  one,   to Sir John Champneys (d. 1556) of Hall Place, a successful member of the Skinners’ Company and sometime Lord Mayor of the City of London, and his second  wife Meriell.

Hall Place, on the eastern outskirts of the village, was originally built in stone – salvaged from Lesnes Abbey – in 1537 by  the aforementioned Sir John Champneys (probably on the site of earlier, thirteenth- and fourteenth- houses respectively owned by the de Aula and Shelley families).    It was subsequently extended in brick in 1649-66 by Sir Robert Austen, who had bought  it from Sir John Champneys grand-son Richard in 1649.

Crayford was first recorded as Crecganford in the  Anglo-Saxon Chronicles, as the site of  a battle that took place in 457 between Germanic invaders and native Britons.  The name alludes to a crossing-point on the River Cray (a tributary of the Thames), which had been in existence since earlier  times (the “lost” Roman settlement of Noviomagus may have been here). The early settlement grew   in the Medieval period, and began to become industrialised in the post-Medieval. 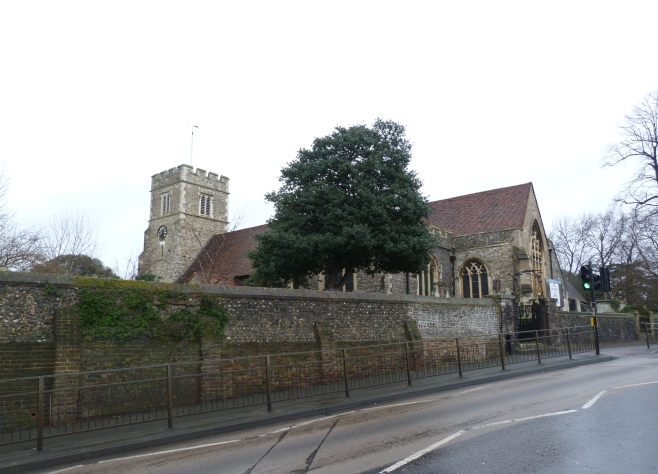 The church of St Paulinus was probably originally built in timber in the Saxon period, being mentioned in the Domesday Book of 1086 (”the archbishop himself holds Erhede and there is a church”).   It was subsequently rebuilt in stone in the Norman period and style at the turn of the eleventh and twelfth centuries (nave and chancel).  And extended in the later Medieval English Gothic style in the early thirteenth century (south aisle); in the Decorated style at the turn of the thirteenth and fourteenth (second nave); and in the Perpendicular style in the fifteenth (tower).

Dartford takes its name from a ford over the River Darent, present at least as long ago as Roman times (there was also extensive settlement along the Darent in Roman times).  The present town is thought to have been founded in Saxon times, and is mentioned in the Norman Domesday Book, compiled in 1086, as belonging to the King (though by the twelfth century it had entered the possession of the Knights Templar). 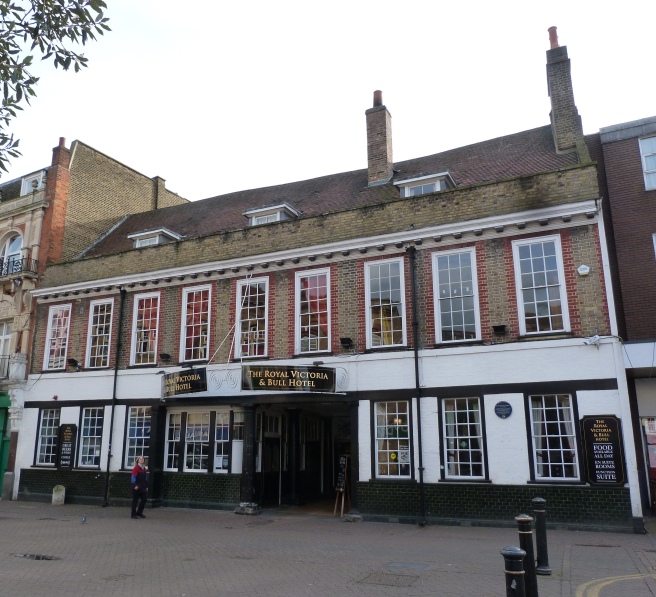 It became an important waypoint for pilgrims en route to Canterbury and the continent in the later Middle Ages.   Pilgrims stayed in The Bell (One Bell Corner), The Bull (Royal Victoria and Bull) or  The Bull’s Head (Bull’s Head Yard) on the High Street. 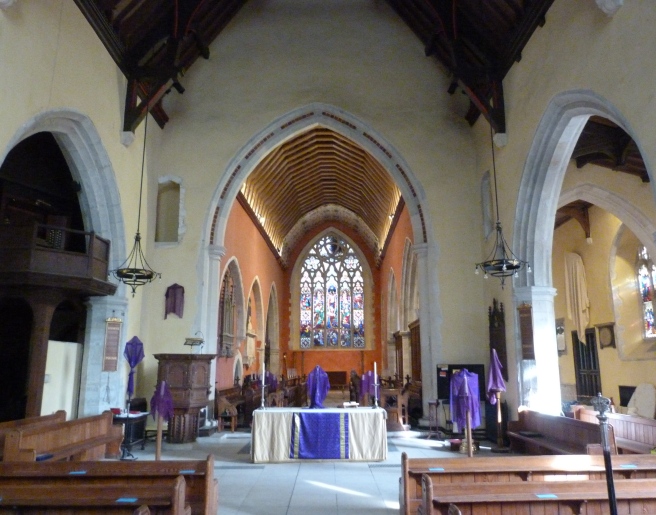 Holy Trinity Church was originally built in the ninth century, and  rebuilt in the late eleventh, around 1080, by Gundulf, Bishop of Rochester.  It was then extended in the late twelfth to early thirteenth centuries, and in 1235 hosted the proxy wedding of King Henry III’s sister Isabella and the Holy Roman Emperor Frederick II.  Later, Henry V gave thanks here for his victory over the French at the Battle of Agincourt in 1415.

The fine painting of St George and the Dragon dates to 1470.

Dartford Priory, England’s only Dominican convent, was founded here in 1346.  After the Dissolution of the Monasteries in 1539, the site became that of a Tudor manor house, where King Henry VIII’s fourth wife, Anne of Cleves, lived for a while after her divorce, and where Queen Elizabeth I stayed twice.   The  gate-house to the manor still survives.

Dominican and Franciscan hospitals were also founded here in the fourteenth century.