From Dartford,  the old Roman road of Watling Street continues to run ESE along the northern edge of the North Downs directly to Rochester (and beyond).  In this area, parts  of it follow  the line of a pre-Roman track – and that of the Pilgrims’ Way from Winchester to Canterbury  – along the ridgeway.  Also in this area, the road tends to be busy with fast-moving vehicular traffic, and unsuitable for those travelling on foot (indeed, as it approaches the M2, it becomes a dual  carriageway).

There is, though, an alternative pedestrian route to the north of that of the road, through Stone, Greenhithe, Swanscombe, Northfleet, Perry Street, Windmill Hill, Chalk, Shorne, Higham and Strood. The departure point is at the Brent Roundabout.

The small village of Stone would appear to have been founded in Saxon times.

Stone Church (St Mary the Virgin), originally built in around 970, and subsequently rebuilt in around 1260.  This makes it an exact contemporary of Westminster Abbey, and it is it is said that the same masons worked on both buildings.  The church forms a distinctive landmark, especially when viewed from the nearby Thames Estuary, and indeed mariners came to know it as the  “Lantern of Kent”.

Stone Castle was originally built in the mid-eleventh century.  Only parts of it are still standing.

Greenhithe was first recorded as such in 1363, although it would appear to have been founded in Roman times.  In 1363, the King, Edward III, endowed the manor upon the Prioress and Abbey of the Dominican Sisters of Dartford.

Ingress Abbey was built on the site in 1833 (in part,  it is said, with stone salvaged from the then recently demolished “old” London Bridge).  A few fragments of the old abbey still stand in the grounds of the new building, including the Grange, Monks’ Well, Lovers’ Arch and Cave of the Seven Heads.

Swanscombe would also appear to have been founded in Roman times, and to have been occupied by both Saxons and Vikings at different times during the succeeding Dark Ages.  It is referred to in the Norman Domesday Book of 1086 as Suinescamp, in reference to the Viking King Sweyn Forkbeard. 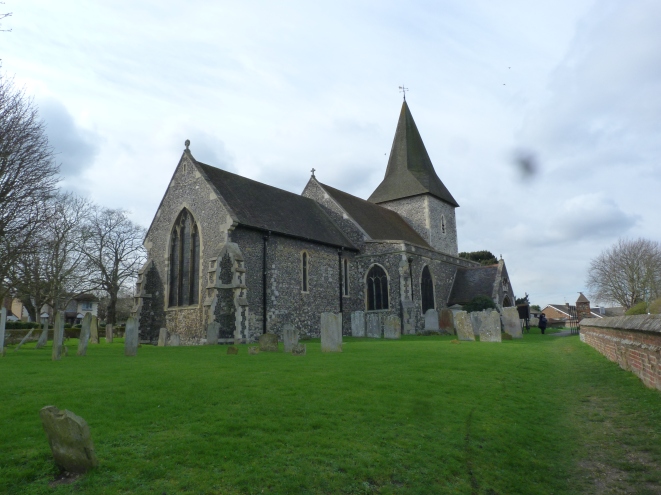 In the churchyard of  the partly Saxon Swanscombe Church (St Peter and St Paul), a memorial marks the spot  where in 1067 “the Men of Kent and Kentish Men … met the invader William, Duke of Normandy … [and] … offered peace if he would grant their ancient rights and liberties.  Their request was granted and from that day the motto of Kent has been ‘Invicta’, meaning unconquered”.

Incidentally, Swanscombe is also important as the site of discovery in 1935 of some of the oldest human remains in the country, dating from around 400000 years ago (together with prehistoric stone tools of the Clactonian and Acheulian cultures).

Chalk would also appear to have been founded in Roman times, the remains of a villa having been  unearthed here, and was certainly well established by Saxon times.

Chalk Church (St Mary), which stands somewhat separate  from the main village, was probably originally built in the eighth century, and subsequently rebuilt in the twelfth, and extended in the thirteenth, fourteenth and fifteenth.  The prominent tower is fifteenth-century.

Shorne Church (St Peter and St Paul) was also built in the Saxon period, and subsequently rebuilt in the later Medieval.

The former St Katherine’s Chapel was originally built in the thirteenth century, converted into a malthouse after the Reformation of the sixteenth, and converted back into a Catholic church in the nineteenth.  Some of the original structure of the building remains.

Lower Higham  was founded in Saxon times.   The Benedictine Higham Priory, dedicated to St Mary (and St Sulpice), was founded here in the twelfth century, and dissolved in the sixteenth.

The former priory and later parish church still stands, although it is redundant.

Strood is essentially that part of modern Rochester lying to the west rather than to the east of the River Medway.  It was originally founded alongside Watling Street in Roman times, and well established by Saxon times (when it was repeatedly pillaged by Vikings).

Frindsbury Church  was originally built here at least as long ago as  the eleventh  century, and subsequently rebuilt in the twelfth.

Temple Manor was originally built, by the Knights Templar, in the thirteenth century.  The order was then suppressed in the fourteenth. 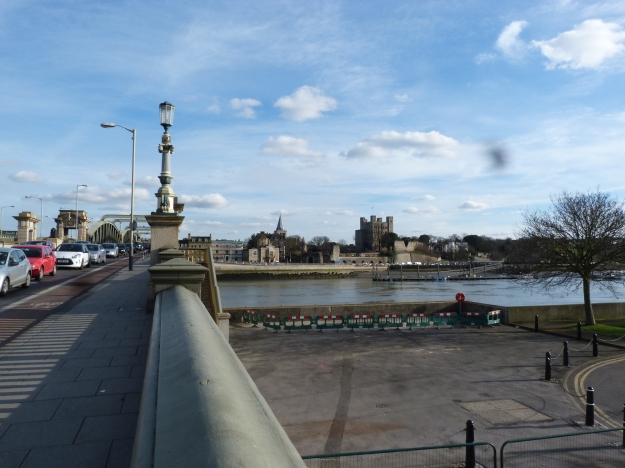 Rochester would appear to have been  founded in pre-Roman times, and to have been one of the main administrative centres of the Ancient British or Celtic tribe known as the Cantiaci.  It was also an important regional centre in the Roman times, when it was known as Durobrivae, and in Saxon times, when, like Strood, it was repeatedly pillaged by the Vikings. 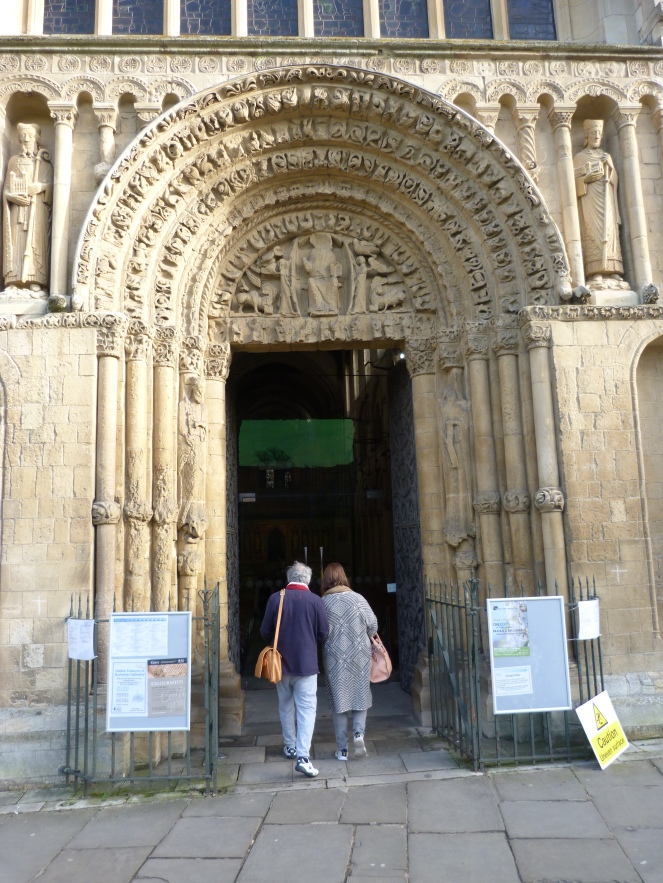 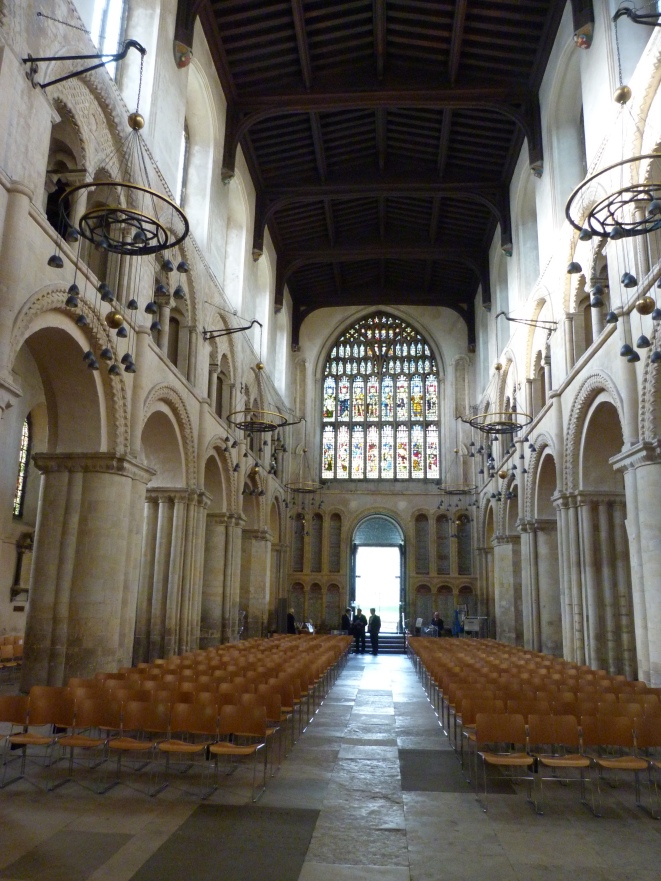 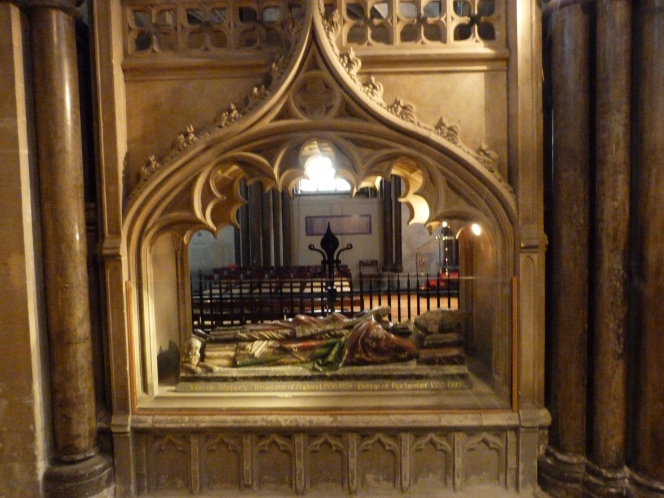 At the turn of the sixth and seventh centuries, the Kentish King Ethelbert was based here, and built the first cathedral here (he also established a legal system).  The cathedral was rebuilt in the Norman period, between 1080-1130, and extended in the later Medieval, in 1227 and 1343.

The castle was built in the twelfth century and twice saw action in the thirteenth, in the sieges of 1215 and 1264 (i.e., during the Baron’s Wars).

2 thoughts on “A Virtual Pilgrimage from London to Canterbury: Day Two – Dartford to Rochester”