Stratford was first recorded in 1067 as Straetforda, in reference  to a ford on a Roman road (note also that there is evidence of pre-Roman activity in the area). In the twelfth century, Queen Matilda caused the improvement of the road, that in time became Stratford High Street. 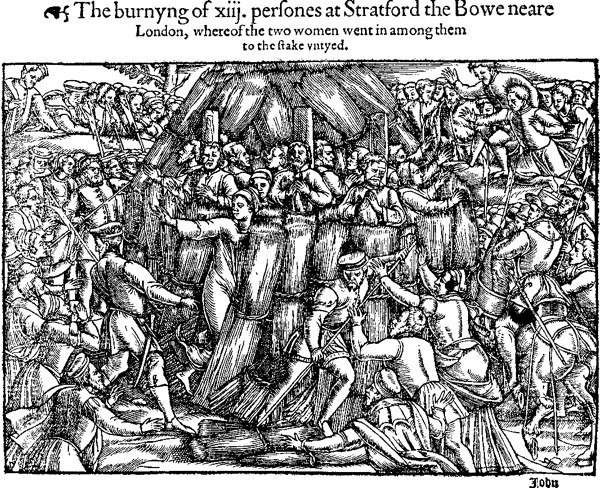 In 1556, during the Counter-Reformation, some 20000 people gathered on Stratford Green  to witness the burning at the stake by the Catholic Queen Mary of thirteen Protestants (eleven men and two women) accused of  heresy.

There is a memorial to the martyrs outside the – nineteenth-century – church of St John.

Stratford in the Medieval and post-Medieval periods was known for its industry, there being in the area a number of tidal mills,  distilleries and gunpowder and other manufactories.  By  the eighteenth and nineteenth centuries there were also  calico and silk-printing works and, just east of Bow Bridge, the Bow porcelain works.  The Eastern Counties Railway arrived in the mid-nineteenth century, and the southern  part of Stratford New Town was actually built by the railway company (at that time being known as Hudson Town after the company chairman).   The Central Line “tube” arrived in the early twentieth, the Docklands Light Railway and Jubilee Line “tube” extension in the late twentieth century, and the Channel Tunnel rail link in the early twenty-first.  Stratford has been a part of the London Borough of Newham since the local government reorganisation of 1965.  The London Olympics were housed in purpose-built stadia here in 2012, and at the same time a large-scale regeneration of the surrounding area was begun.

Stratford Langthorne Abbey, also known as the Abbey of St Mary Stratford Langthorne, was originally built as a Savigniac house in 1135, possibly on the site of an earlier, Saxo-Norman manorial centre and associated church, and was incorporated into the Cistercian order in 1147.  It was subsequently rebuilt and extended at least twice, in around 1220; but also  to have begun to stagnate in around 1350  – coincidentally or otherwise close to the time of the “Black Death” of 1348-9.  It was  finally dissolved in 1538, at which time it was still evidently a wealthy abbey, owning property in numerous parishes throughout London.  After the dissolution, most of the buildings on the site were demolished, although the main gateway survived until the nineteenth century. 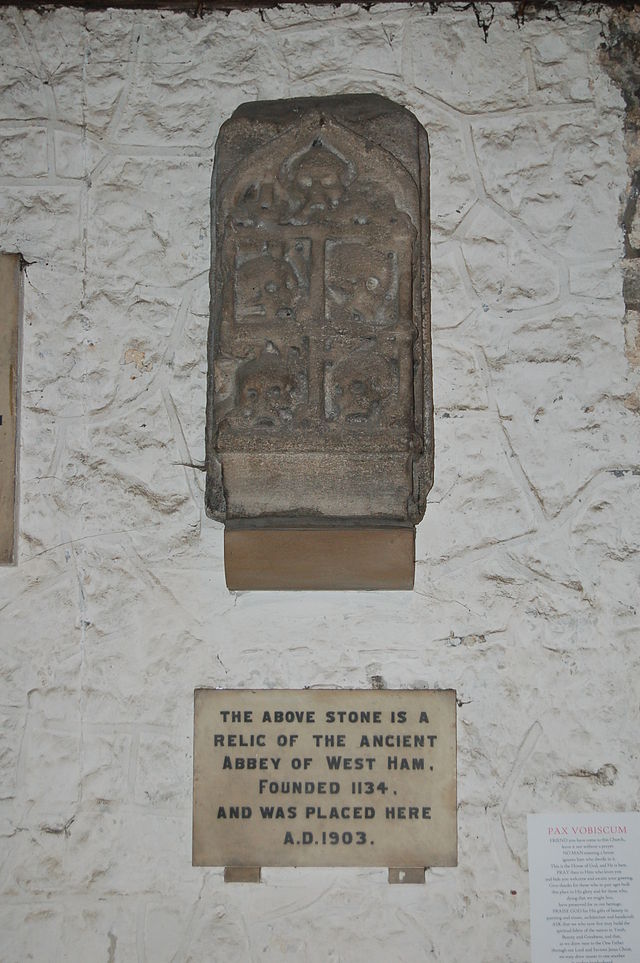 The key- stone from above the door to the charnel house may be seen in the nearby church of All Saints in West Ham.

Archaeological excavations on the abbey site, undertaken in conjunction with the construction of the extension to the Jubilee Line in 1973-94, revealed that the abbey church was  comparable  in size to that of  Fountains Abbey in Yorkshire, founded at around the same time.  The excavations also revealed 647 burials in the abbey  cemetery, more than recorded in any other Cistercian site in Europe.  Two of the skeletons exhibited broken arm and leg bones held together with metal plates, implying that the monks possessed considerable medical knowledge and skill.  Many others, though, most notably those from the foundation of the abbey up to around 1220,  exhibited untreated fractures, implying that the monks were generally unwilling to perform surgery – perhaps interpreting as a ban a Papal Decree issued by Boniface VIII after  the Council of Tours in 1163 (“Eccelestia abhorret a  sanguine” ).