Bankside in the Borough of Southwark, that is, the area adjacent to the riverbank on the south side of the Thames, opposite the City of London, was first recorded as Banke syde in 1554.  It is shown above in the foreground of   the Visscher panorama of 1616.

Southwark itself was was first recorded as “Sudwerca” in the “Domesday Book” of 1086, taking its name from the Old English “suth”, and “weorc”, meaning defensive work or fort, in reference to the Roman defences south of the river.  The area was indeed first settled by the Romans in the years immediately after the conquest in 43AD, i.e., concomitantly with the City north of the river.  A nunnery was established there in the Saxon period that became the priory of St Mary Overie in the Norman, the priory church becoming the parish church of St Saviour after the Dissolution of the post-Medieval, and the collegiate church of St Saviour and St Mary Overie, or Southwark Cathedral,  in more modern times (see last week’s posting).

Historically, Southwark was a so-called “liberty”, free of many  of the regulations governing life in the City across the river.  Over time it  became one of the poor places in which it, the rich City, attempted to locate  – and forget – some of its more “undesirable” buildings (including prisons such as the Clink, King’s Bench, Marshalsea and White Lion), industries (including tanning) and activities (including – in the numerous “stews” – prostitution; animal-baiting; and the performance of stage plays; all of which attracted large and unruly crowds).

The first “stews” were founded in Bankside  in  the early twelfth century (the word “stew” meant originally a fish pond, subsequently a public bath-house, and eventually a brothel).  They lay between the Thames to the north, Bank End to the east, what was then Maiden Lane and is now Park Street to the south, and Cardinal’s Cap Alley to the west.  Most lay on land owned by the Bishops of Winchester (non-highlighted area on above map), who had built a palace on nearby Clink Street in c. 1144, parts of which still stand, the rest on land owned by the Prioresses of Stratford Priory (highlighted area on above map).

Ordinances for their governance had to be put in place as long ago as 1161, under Henry II.  Some of the ordinances were concerned with the welfare of the working girls, for example “no brothel-keeper to prevent his whore entering or leaving the premises at will” and “quarterly searches of every brothel must be carried out to ensure no woman is imprisoned there against her will … ”.  Others, though, restricted their rights, for example “all whores to wear some agreed garment indicating their profession” (and “no whore to wear an apron”).   Still others were concerned with public health, for example “no brothel-keeper to let any whore work on his premises if he knows she has ‘the burning sickness’”.  Or with public order, for example “no whore to entice any man into the brothel by pulling on his coat or any other item of clothing”, “no whore to throw stones at passers-by or pull faces at them for refusing to come in” and “no whore to chide with any man and make a fray”.

Tax records from the fateful year of 1381 show that there were seven open  at this time; further records from the later 1400s, that there were eighteen at this time.  The stews were temporarily closed in 1505 by the first Tudor King, Henry VII, after an outbreak of syphilis, although most re-opened within the year.  They were supposedly permanently closed in 1546 by Henry VIII, who wished Bankside “no more to be used as a common Bordell[o]”, although most if not all re-opened after Henry’s death in 1547.  There were twenty-two in operation in Bankside in 1546, namely, the “Antelope”, “Barge”, “Bear”, “Bell”, “Boar’s Head”, “Bull’s Head”, “Cardinal’s Hat”, “Castle”, “Cock”, “Crane”, “Cross Keys”, “Elephant”, “Fleur de Lys”, “Gun”, “Hart”, “Hart’s Horn”, “Horseshoe”, “Lion”, “Little Rose”, “Rose”, “Swan” and “Unicorn” (the infamous “Holland’s Leaguer” in Paris Gardens opened during the reign of the first Stuart King, James I,  in 1603).

Their more-or-less precise locations have been established by painstaking historical work involving a wide range of source materials (including a Tudor mural depicting Edward VI’s coronation procession in 1547, in which they all appear in the background).

Readers interested in further details are referred to E.J. Burford’s estimable “Bawds and Lodgings – A History of the London Bankside Brothels”, published by Peter Owen in 1976 (and republished as “The Bishop’s Brothels” by Robert Hale in 2015). 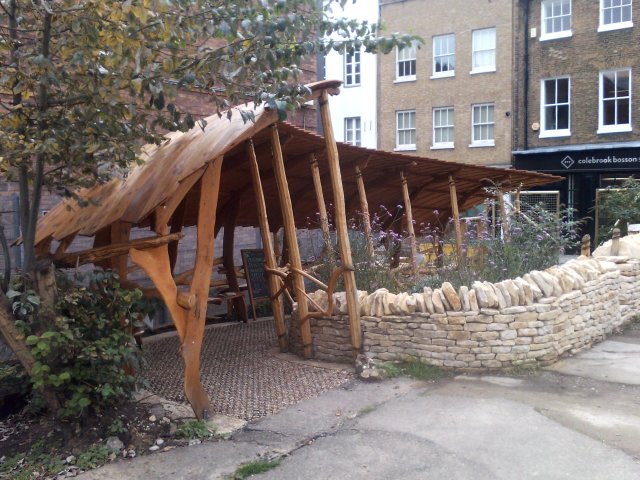 Just off Borough High Street, at the corner of  Union Street and Redcross Way, is the unconsecrated burial ground known as the “Crossbones Graveyard”.  Here from Medieval times were interred the “Outcast Dead”, including the “Winchester Geese”, which is to say women who worked as prostitutes in brothels or “stews” licensed by the Bishops of Winchester.

Having recently been at least temporarily spared from “development”, the site, which is owned by Transport for London,  is currently in use as a community garden of remembrance (under the auspices of the Bankside Open Spaces Trust).  It is generally open  between 12-3 on weekdays.  Regular vigils for the dead are also held here, at 7:00 pm on the 23rd of every month.

A “Museum of London Archaeology Service” monograph describes in detail the findings of recent archaeological excavations at the site.  One of the excavated skeletons, of a  nineteenth-century woman,  aged only around sixteen to nineteen,  exhibited pathological indications of advanced syphilis.  Research undertaken for an episode of the BBC television series “History Cold Case” in 2010  indicated  that this skeleton was likely to be that of one Elizabeth Mitchell, who is recorded as having been admitted to nearby St Thomas’s Hospital suffering from the running sores all over the body symptomatic of advanced syphilis, and as having died there, on 22nd August 1851, aged nineteen.

The first animal-baiting arena on Bankside was probably built either in the late fifteenth century or the early sixteenth.  The last would appear to have closed down sometime in the late seventeenth century or the early eighteenth, after the opening of a new  venue in Hockley-in-the-Hole in Clerkenwell (note, though, that the barbaric practice of animal-baiting was not actually outlawed until  as recently as 1835).

At one time or another, there were six animal-baiting arenas in operation in Bankside.  Henry VIII is known to have witnessed a bear-baiting at Paris Gardens, from a barge moored offshore, in 1539.  In succeeding Stuart times, the actor Edward Alleyn and theatrical impresario Philip Henslowe, having just been jointly  appointed “Master Overseer and Ruler of the Bears, Bulls and Mastiff Dogs”, announced sometime in 1604: “Tomorrow being Thursdaie shall be seen at the Bear-gardin on the bankside a great mach plaid by the champins of Essex who hath challenged all comers whatsoever to plaie v dogges at the single beare for V pounds and also to wearie a bull dead at the stake and for your better content shall have pleasant sport with the horse and ape and whipping of the blind beare”. 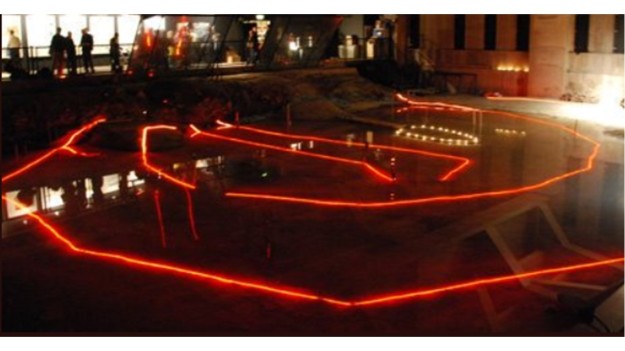 “The Rose” was originally built  by Philip Henslowe to a fourteen-sided design in 1587, subsequently rebuilt to a less regular design in 1592, and demolished in 1606.    The site is currently conserved in the basement of  Rose Court in Park Street, and marked by a Corporation Blue Plaque on the outside of the building.  Christopher Marlowe’s plays were first performed here.

“The Swan” was built in 1596, decayed by 1632, and last recorded in 1634. Ben Jonson’s lost play “Isle of Dogs” was performed here in 1597, drawing such criticism for its “seditious and slanderous” content that the author was temporarily thrown into – the  first Marshalsea – prison! 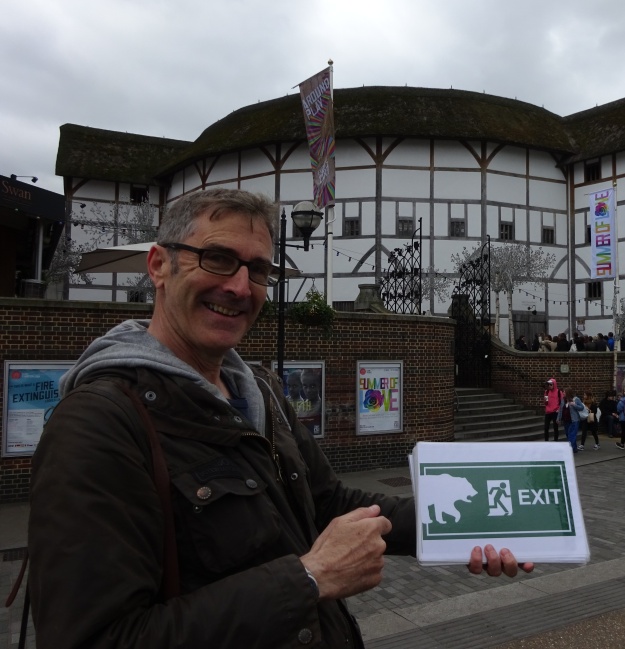 “The Globe” was built by the theatrical impresario Cuthbert Burbage in 1599, using some materials salvaged from his father James’s “The Theatre” in Shoreditch, after the expiry of the lease on that latter property.  According to the Shakespearean scholar Steve Sohmer, it opened on June 12th, 1599.   It was burnt down in a fire on June 29th,  1613, after sparks from a theatrical cannon set some  thatch  alight during a performance of Shakespeare’s “Henry the Eighth”. It was rebuilt in 1614, but fell into disuse after the performance of plays was banned by an Act of Parliament forced through by the Puritans in 1642, and it  was demolished, by order of the Puritan City authorities, on April 15th,  1644.  A plaque marks its site, on Park Street.  This was “Shakespeare’s (own) play-house, and the venue where many of his plays were first performed”.

Readers interested in further details are referred to Julian Bowsher’s “Shakespeare’s London Theatreland”, published by Museum of London Archaeology in 2012.