St Leonard Foster Lane (not individually identified on sixteenth-century “Agas” map/Map of Early Modern London) was originally built around 1278, and subsequently enlarged in the sixteenth century, following the demolition of the nearby Collegiate Church of St Martin in 1548.   It was referred to as “S. Leonardus juxta S. Martinus” in Pope Nicholas IV’s “Taxatio Ecclesiastica” of 1291. In his “Survey of London” of 1598, Stow noted a memorial  without the church to John Brokeitwell, “an especial re-edifier, or new builder”.  He also noted a small number of monuments in the interior, including one to Robert Trappis, goldsmith (d. 1526),  engraved with the epitaph: “When the bells be merely roung,|And the Masse devoutly soung,|And the meate merely eaten,|Then shall Robert Trappis, his wyffs,|and his children be forgetten”. In or around 1636, with James I of England and VI of Scotland not long dead, the rector of the church, William Ward, was forced to resign after having preached against the Scots.

The church burned down in the Great Fire of 1666, and was never rebuilt, the former parish uniting with that of Christ Church Newgate Street. 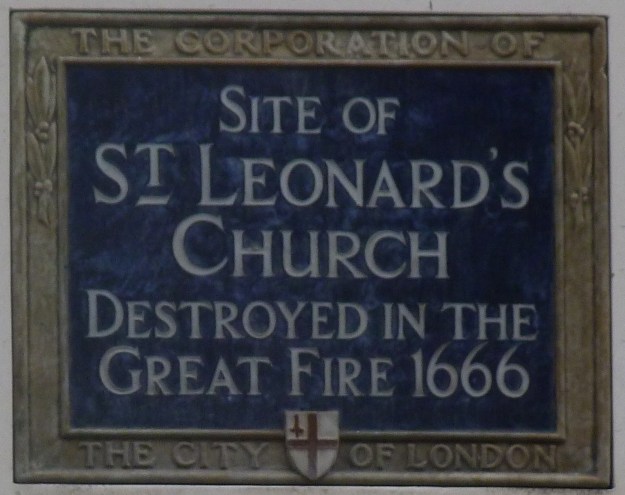 A Corporation “Blue Plaque” marks its former site.  A communion cup of 1616 salvaged from the church is now in St Sepulchre.