THE FLOWER OF ALL CITIES 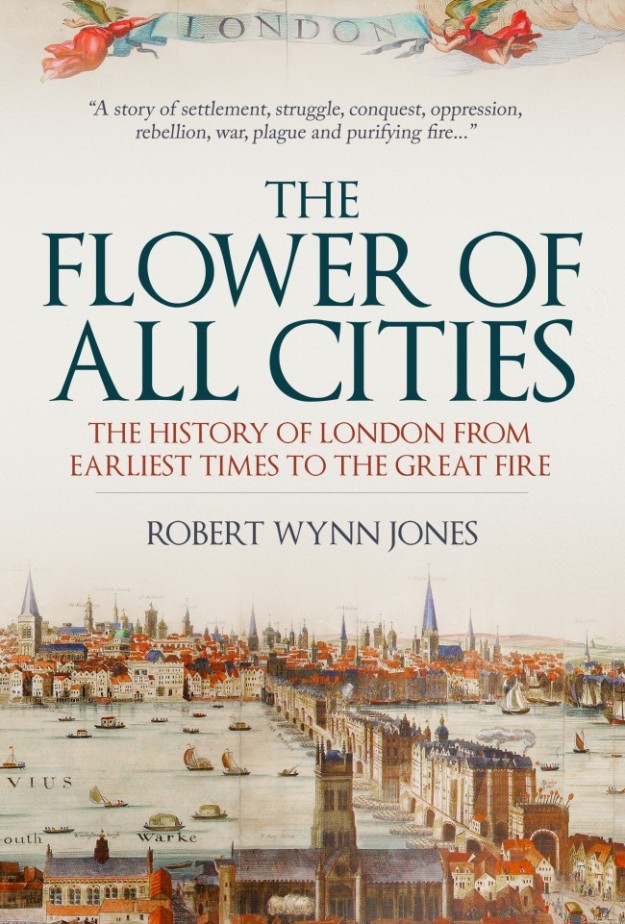 My second book on the history of London, “The Flower Of All Cities”  is now available for purchase  … The Flower of all Cities – Amberley Publishing

Dr Robert Wynn Jones is a retired professional palaeontologist and  an interested amateur archaeologist and historian.  He maintains a website on   the history of London up to the time of the Great Fire of 1666 (www.lostcityoflondon.co.uk), and leads occasional guided walks on related themes.  He is also the author of “The Lost City of London”, published by Amberley Press in 2012 (Second Edition, 2015).   He lives in London.  His distant ancestor John West, born in 1641, lived in London in the late seventeenth and early eighteenth centuries.  John West was a Clothworker, and also a Scrivener, and a  Governor – and a benefactor – of Christs’ Hospital.  He was married in the church of St Gregory by St Paul’s in February, 1666, to the widow Frances Mickell, whose first husband, Robert, had died of the Plaque in September, 1665. John and Frances  are recorded as having lived in a house near the Stocks Market, which, like the church in which they were married, would have been burned down in the Great Fire of 1666.  John died in 1723, and Frances in 1725.  It appears that in life John numbered among his acquaintances the famous diarist Samuel Pepys, and that he was one of the witnesses to Pepys’s will, and attended his funeral in 1703.

A large part of London, and almost all of the old walled City that lay at its heart, was burned down over the space of a few  short days during the Great Fire of September 2nd-6th, 1666.  This book  attempts as it were to unearth  from the ashes at least something of the already age-old and burnished City that had gone before.  The City founded by the Romans in the middle of the first century AD, on  the damp maritime frontier of their vast continental empire, and named by them Londinium.  The City abandoned by the Romans at the beginning of what some still think of as “Dark Ages” of the sea-borne Saxons and Vikings, and known by the former in turn as Lundenwic and Lundenburg.  And the City of the – later – Middle Ages or Medieval period, and the post-Medieval or early Modern, one of the first true world-cities, called by some Londinopolis.  A City of bustling waterfronts and imposing walls, of praying  spires and vying masts, of consuming chimneys and seducing streets, of plunging shadow and abiding light.  That which  the poet William  Dunbar in 1501 described as “sovereign of Cities” and “the flower of Cities all”.

“Dr Robert Wynn Jones has a … focussed enthusiasm.  He wrote The Flower of All Cities: The History of London from Earliest Times to the Great Fire … as a result of his pursuit of his ancestor, John West, who had lived near the Stocks Market at the time of the Great Fire … .  … [The book  is] … well illustrated with unusual as well as familiar images and photographs, and [has a] decent index.  … [It also] has four appendixes providing detailed London walks for different periods … [as well as] … further reading and bibliographies … .  … Wynn Jones … had written a book to be used … : it is full of lists, lengthy quotations from contemporary sources and a great deal of hard information.   …  [I]f the … [reader] … is already an enthusiast  for London then he or she will enjoy browsing through The Flower of All Cities to unearth unexpected insights into the pre-Fire”.  – London Topographical Society Newsletter.

***** “[E]ssential reading for anyone remotely interested in the history of our great city”.  – A.T.

“All in all an enjoyable read and very thoroughly researched”. – T.R.

THE LOST CITY OF LONDON 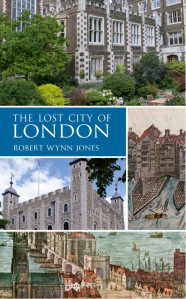 My first book on the history of London, “The Lost City of London“, was published by Amberley in 2012 (and a  revised and updated second edition in 2015).

In 1666 London was devastated by the Great Fire, which gutted over 13,000 houses, over eighty parish churches and St Paul’s Cathedral. Bob Jones has set out to discover the original structures and streets that survived the Great Fire and can still be seen today. This book maps, describes and illustrates what remains of the City of the Black Death, the Peasants’ Revolt, the Reformation, the Civil War, and the Great Plague; the City of Chaucer and Shakespeare and Pepys. Discover the Roman ruins buried beneath Cannon Street Station, the seven parish churches that survived the blaze, the drinking establishments still open for business, and much more …

At first glance, one might think that not much remains today of the anatomy  of the City of London from before the time of the Great Fire, which according to contemporary accounts and maps destroyed 80% of the City, including around 13000 private residences and places of business within and immediately without the walls, 85 parish churches and St Paul’s Cathedral, 45 Livery Company Halls, Castle Baynard, the Custom House, the Guildhall, the Royal Exchange, and the Royal Wardrobe.

But dig a little deeper, literally or metaphorically, and it is still possible to uncover hidden treasures from that ancient time.  Dab away at the accumulated tarnish of the centuries, and it is  still possible once more to bring to light an ancient masterpiece.

That is what this is all about.  Re-establishing the ancient City limits and street plans from surviving structures and streets, maps and  historical records, and archaeological finds.  And recreating the ancient lives,  sights, sounds and smells of those  streets in the City of one’s imagining.

It is a story of settlement, struggle, conquest, oppression, rebellion, war, plague and fire.  And above all of survival.

“The Lost City of London in the title of thus book is loosely defined as the current City, together with … ‘some areas that lie a little outside the original walls’. Its author’s objective is ‘to discover the original structures and streets that survived the Great Fire and can still be seen today’, and his book describes what remains of the city of the Black Death, the Peasants’ Revolt, Shakespeare and Pepys.  He starts with six maps showing parts of the present-day street plan; lists of many of the buildings and sites mentioned later in the book help the reader to find them on the maps.  Approximately the first third of The Lost City of London takes the reader on a journey through time, starting with the bedrock that supports all of the structures of London. It shows the initial impact of the first people to establish settlements in the area, describes the establishment of Londinium by the Romans, mentions the relatively brief Anglo-Saxon occupation of the walled city, and relates how London was changed during the medieval period and beyond. The Great Fire – and Christopher Wren’s reconstruction plan – brings the reader’s journey to a close. This section is well-written, and gives a thoroughly-referenced overview of the ways in which London has been subjected to seemingly endless alterations brought about by the needs and cultures of a constantly changing population.  The second part of The Lost City is a comprehensive and readable gazetteer of the city’s historic structures, streets and districts. Readers can go straight to an entry that interests them, or can enjoy a satisfying browse.  The drawings and photographs give extra value to the text of a volume that many will want to carry in a rucksack as they walk the streets of the City is search of the capital’s past”. – London and Middlesex Archaeological Society Newsletter.

” … Illustrated with modern colour photographs alongside historic prints and maps, this concise and erudite handbook provides an alphabetical gazetteer to the scattered structures that survive, from fragments of the Roman walls to Jacobean houses in Cloth Fair, and from the mighty White Tower to the tiny church of St Ethelburga”. – PostScript.

***** “I bought this book after a tour through medieval London with the author. It is a great book to get prepared for a city walk on your own or as a saver of memories after you visited. A great and profound reference book”.  F.K.

***** “Very useful addition to my library – already have many other books on the City of London and found a niche not covered by others”.  – M.J.

“It takes a micropalaeontologist with an eye for detail and a proclivity for perpetuating pensive penmanship to uncover the fossilised fragments of an ancient city … and record them for posterity. … I highly recommend buying a copy or two of this book (it’s a great read, and it makes a great gift)”. – M.K.