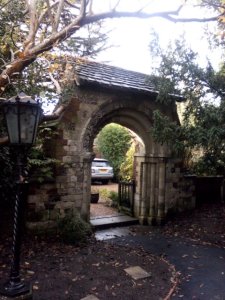 Merton was first recorded in a Saxon charter of 949, as Mertone, meaning farmstead or estate (tun) by the pool (mere) (in context, either on or near  the River Wandle).  It was later recorded in the Norman “Domesday Book” of 1086 as Meretone; the manor as belonging to the King, William I.   Later still a large Augustinian priory was built here in the Medieval  period, which survived until the post-Medieval.  Huguenots settled the area in the sixteenth century, and set up cottage industries on the banks of the Wandle.  Liberty then set up their print-works on the same spot in the eighteenth century, and William Morris his workshop in the nineteenth.  The modern town developed during the late nineteenth century, in part as a garden suburb founded by the successful local businessman John Innes – he of compost fame!

A large Augustinian priory dedicated to St Mary was founded on the east bank of the Wandle  in Merton by Gilbert, Sheriff of Surrey, in 1117, which survived for over four hundred years until its eventual dissolution under Henry VIII in 1538 (*).  At its height, it was one of the most wealthy and influential of all the English Augustinian houses, finding particular favour under Henry III (r. 1216-72), who was a frequent visitor.  Among those educated at the priory were Nicholas Breakspeare (1100-1159), who went on to become Pope Adrian IV, the only Englishman ever to hold that exalted office; Thomas Becket (1118-70), who went on to become Archbishop of Canterbury; and Walter de Merton (1205-77), who went on become Chief Justice of England, and to found the college in Oxford that to this day still bears his name.

Essentially only the foundations of the former chapter house of the priory survive to this day, in an underpass under Meratun Way.  Note, though, that parts of the formerly surrounding wall and ditch can also still be seen.  Note also that a fine Norman doorway  from the priory can still be seen, albeit in a remote location,  outside the originally twelfth-century church of St Mary in Merton Park.

(*) It is said that materials salvaged from the priory were re-used by Henry in the construction of his grand and now-lost Nonsuch Palace in neighbouring Sutton. 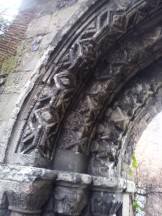 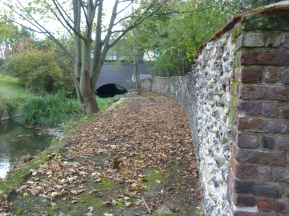 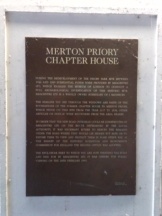 A Museum of London Archaeology Service monograph describes in details the findings from archaeological excavations undertaken at the priory site between 1976-90 (Miller & Saxby, 2007, The Augustinian Priory of St Mary Merton, Surrey, MoLAS Monograph, 34).   Findings from excavations in the priory burial grounds showed that at least 517 of the 664 studied inhumations  were of adult males, including at least  22 of the 23  in the chapter house (in context, likely priors), suggesting a certain amount of restriction of burial right to male clergy and select laity.   Interestingly, approximately  9%  of the total number of studied skeletons, including 100% of those from the chapter house and church, showed evidence of Diffuse Idiopathic Skeletal Hyperostosis or DISH, a form of pathology associated with a high-calorie diet, obesity and diabetes, and apparently comparatively common among high-ranking clergy!  Approximately 13% bore evidence of healed fractures, possibly, although by no means incontrovertibly, treated in the  priory  infirmary.  None bore any evidence of surgical intervention,  possibly because  surgical cases would not have  been admitted to the priory infirmary, it being understood from the so-called “Barnwell Observances” that the Master of the Farmery [Infirmary] would not necessarily  have any detailed medical knowledge.

Some important artefacts from the priory site are on display in the Museum of London. 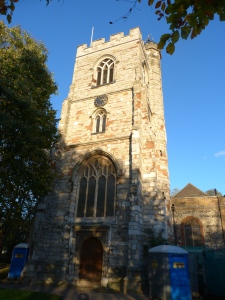 The church of All Saints, also known as West Ham Parish Church, was originally built (or possibly rebuilt) in around 1180, and extended in the thirteenth century, and again in the fifteenth, when the tower was added, and yet again in the sixteenth, when the chapels were added.  It was owned by Stratford Langthorne Abbey from 1334 until the Dissolution of the Monasteries in 1538.  Inside the church are some relics from the dissolved abbey, including a window, in the porch, and a carved stone from the charnel house, in the tower. 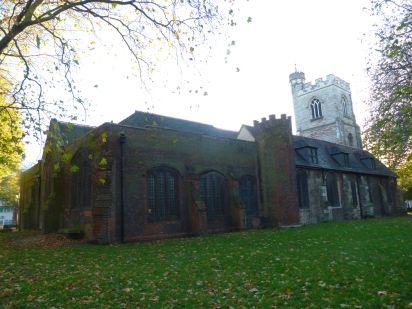 All Saints – General view from rear, with Tudor brick chapel to left 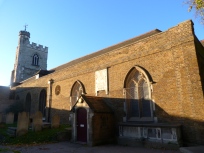 All Saints – General view from front 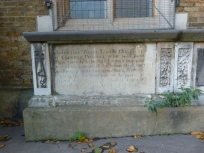 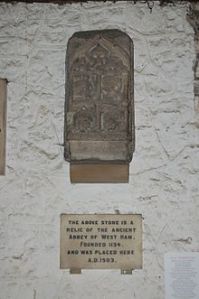 Keystone from Charnel House (now in All Saints, West Ham)

Stratford Langthorne Abbey, also known as the Abbey of St Mary Stratford Langthorne, was originally built as a Savigniac house in 1135, possibly on the site of an earlier, Saxo-Norman manorial centre and associated church, and was incorporated into the Cistercian order in 1147.  It was subsequently rebuilt and extended at least twice, in around 1220; but also  to have begun to stagnate in around 1350  – coincidentally or otherwise close to the time of the “Black Death” of 1348-9.  It was  finally dissolved in 1538, at which time it was still evidently a wealthy abbey, owning property in numerous parishes throughout London.  After the dissolution, most of the buildings on the site were demolished (although the main gateway survived until the nineteenth century).

Archaeological excavations on the site, undertaken in conjunction with the construction of the extension to the Jubilee Line in 1973-94, revealed that the abbey church was  comparable  in size to that of  Fountains Abbey in Yorkshire, founded at around the same time.  The excavations also revealed 647 burials in the abbey  cemetery, more than recorded in any other Cistercian site in Europe.  Two of the skeletons exhibited broken arm and leg bones held together with metal plates, implying that the monks possessed considerable medical knowledge and skill.  Many others, though, most notably those from the foundation of the abbey up to around 1220,  exhibited untreated fractures, implying that the monks were generally unwilling to perform surgery – perhaps interpreting as a ban a Papal Decree issued by Boniface VIII after  the Council of Tours in 1163 (“Eccelestia abhorret a  sanguine” ).

Today I received the advance copies of my latest book, published by Cambridge University Press, and entitled “Foraminifera and their Applications”. (When not treading the streets of London earlier this year, I was busily scribbling away with my other academic and scientific hat on). Although seemingly a completely different field of study, Foraminifera have helped to reveal aspects of London’s past. 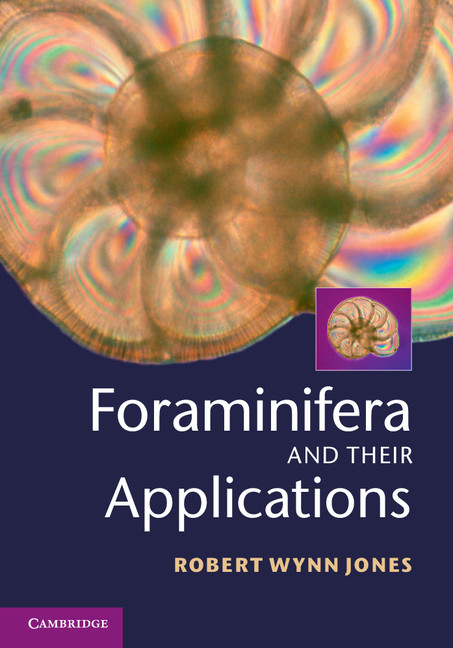 The front cover of my new book

This is a question I am often asked.  I tend to try to keep my answer simple, so as to be as comprehensible as possible to the layman.  I say that they are microscopic single-celled organisms similar to Amoebae, but differing in possessing shells.

Why should I care?

This is another question I am often asked in one form or another (such as “So what?”), usually immediately after I have given my answer to the previous one.  I say: on account of the numerical importance of living ones in modern aquatic environments and of fossil ones in the ancient rock record; and of their practical importance to Science and to Humankind, in developing an understanding of modern environments and the ancient rock record.

Foraminifera have wide ranges of academic and economic applications, for example in environmental science and archaeology, and in petroleum, mining and engineering geology.  In environmental science and archaeology, their principal application is in the interpretation of environmental conditions, including  salinity (e.g., fresh-water, brackish or marine), hydrography  (e.g., supra-tidal, inter-tidal or sub-tidal), sedimentology (e.g., estuarine, deltaic or reefal), and  depth (e.g., marginal, shallow or deep marine).

The Medieval deposits of the River Fleet in the City of London were subject to an environmental archaeological study in the 1970s.  Over 140 species of aquatic organisms were found to be present in the deposits, including Foraminifera such as Nonion germanicus  (pictured above, on the front cover of my book).  Most proved to be fresh-water to slightly brackish.  Associated rare, non-aquatic parasitic nematodes were interpreted as having been introduced into the deposits in dung dumped into the river by humans, alongside food waste and  what might be thought of as industrial waste, including  hide (waste from butchery or tannery) and horn cores (waste from glass manufacture).  The dumping of organic pollutants into the river evidently resulted initially in fertilisation, and in the proliferation of some opportunistic species such as Horned and Opposite-Leaved Pondweed.  However, it also resulted subsequently in poisoning and in the effective elimination of all species, as also indicated in the archive records for 1343.  In consequence, it was ordered in 1357 that “no man shall take … any manner of rubbish … or dung … to throw … into the rivers of the Thames and Fleet … .  And if any one should be found doing the contrary thereof, let him have the prison for his body, and other heavy punishment as well, at the discretion of the Mayor and the Aldermen”.