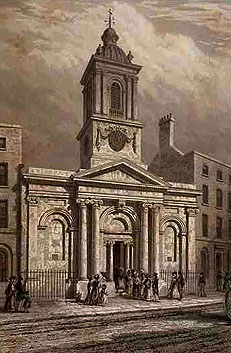 St Peter-le-Poer  was originally built around 1181, incorporated into the priory church of Austin Friars Priory as a private chapel around 1265,  then separated from it again after the Dissolution of the Monasteries in 1538 (the remaining part of the priory church then becoming the Dutch Church), and extended  in 1615-31.  It was undamaged in the Great Fire of 1666 (although ash from the fire settled on an open prayer book in the church, and obscured the text), but later fell into disrepair, and had to be repaired in 1716 and rebuilt in 1788-92, only to be demolished in 1907-08, when the parish was merged with St Michael Cornhill.  Nothing now remains of the church at its former site, at 109-118 Broad Street, although the salvaged pulpit and font still survive, in the church of St Peter-le-Poer in Friern Barnet. 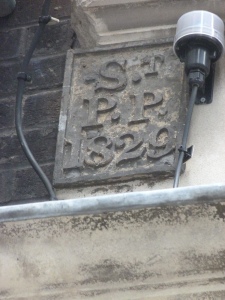 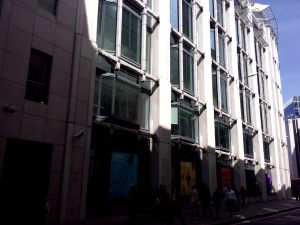 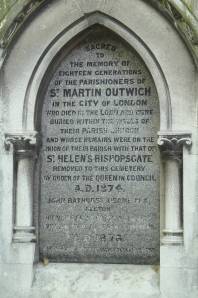 St Martin Outwich was originally built sometime before 1291 (it is mentioned in Pope Nicholas IV’s “Taxatio Ecclesiastica” of that year).  It was undamaged  in the  Great Fire of 1666, but severely damaged in a fire of 1765, and rebuilt by Samuel P. Cockerell between 1796-8, only to be demolished in 1874, when the parish was merged with St Helen Bishopsgate (and the dead from the churchyard were reinterred in the City of London Cemetery in East End). 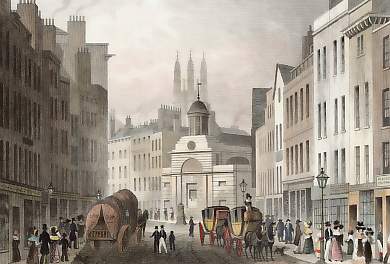 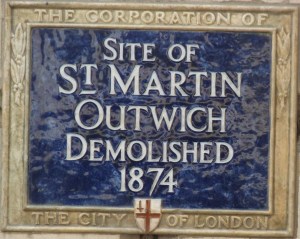 Late fourteenth- or early fifteenth- century alabaster effigies of Sir John de Oteswich and his wife were salvaged from the church, and still survive,  in St Helen’s, on Bishopsgate. 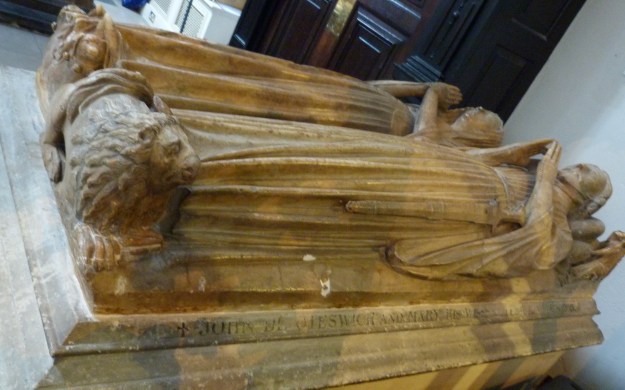 Part of the former churchyard survives, and a Corporation “Blue Plaque” marks the former site of the church. 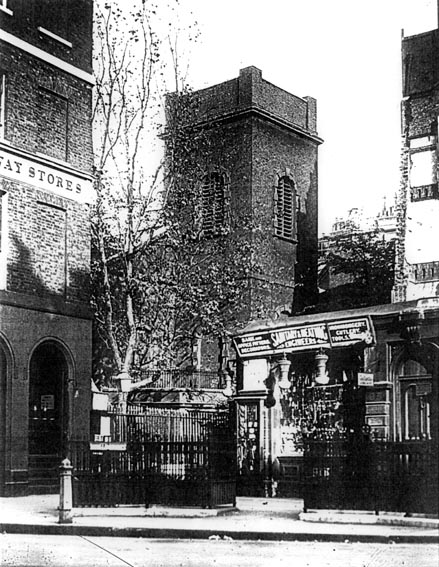 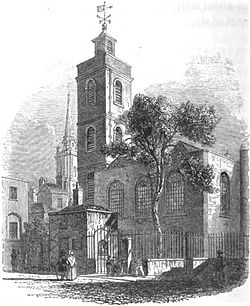 St James Duke’s Place was originally built in 1622, on land that before the dissolution used to belong to Holy Trinity Priory.  It survived the Great Fire of 1666, but fell into disrepair and had to be rebuilt in 1727, only  to be demolished in 1874, when the parish was merged with St Katharine Cree.  Essentially nothing now remains of the church at its former site, other than the name, which lives on in that of St James’s Passage, and some parish boundary markers in Creechurch Lane and in St Katharine Cree churchyard in Mitre Street. Some memorial plaques salvaged from the church survive in St Katharine Cree. 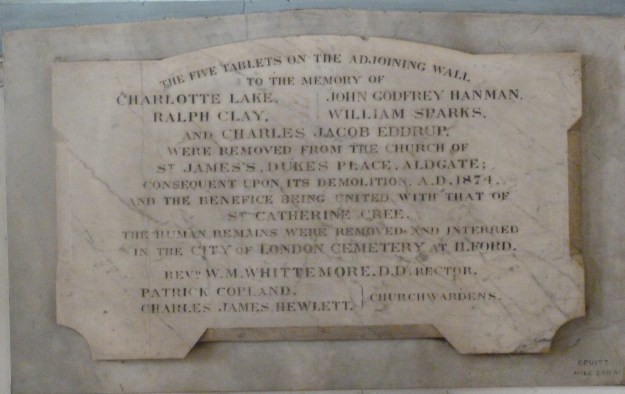 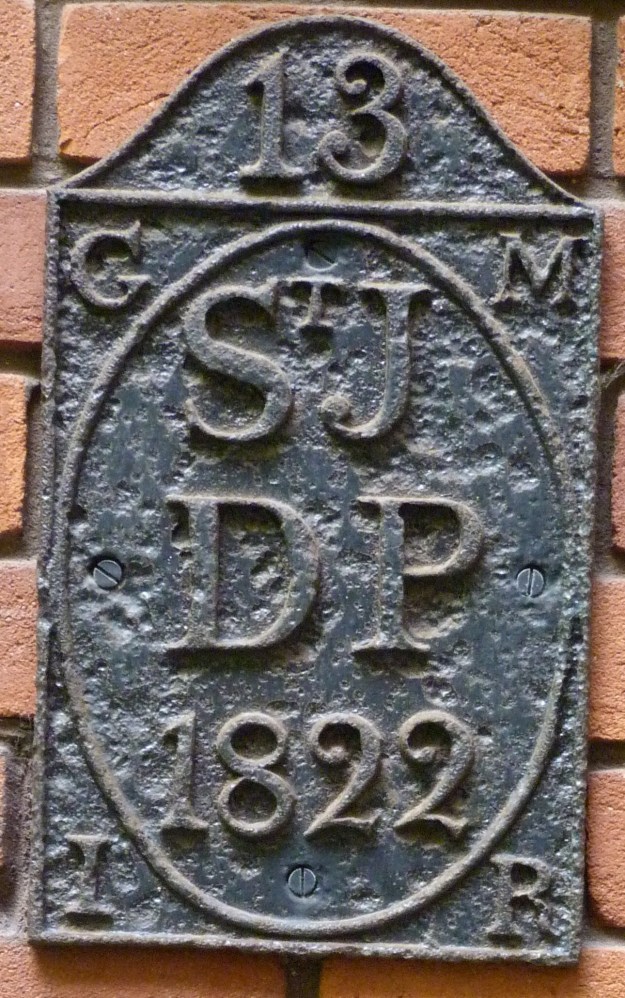 All Hallows London Wall was originally built in around 1120.  It survived the Great Fire of 1666, but was rebuilt by George Dance the Younger in 1765-67. 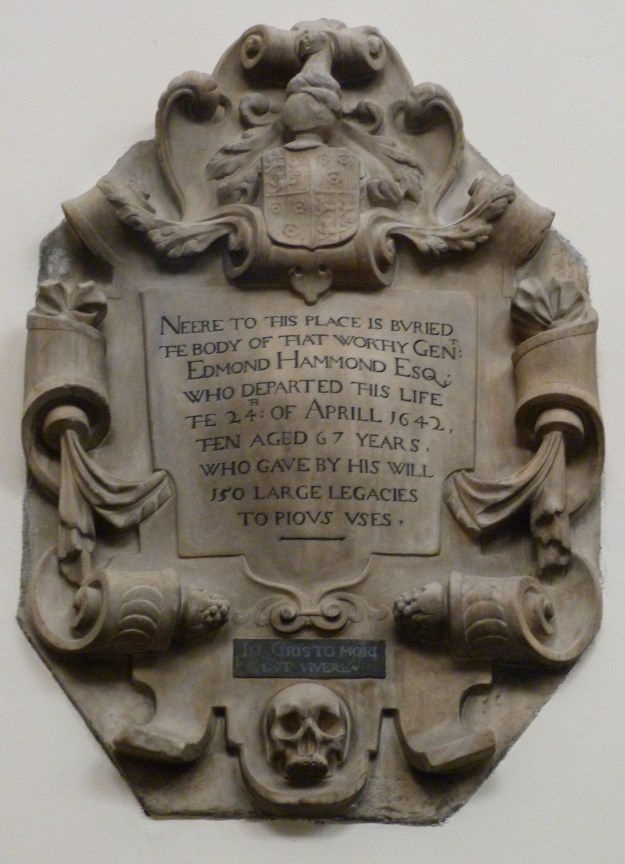 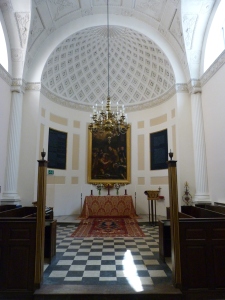 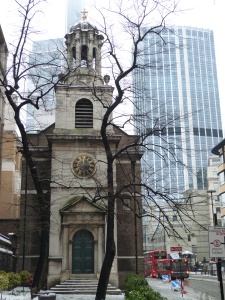