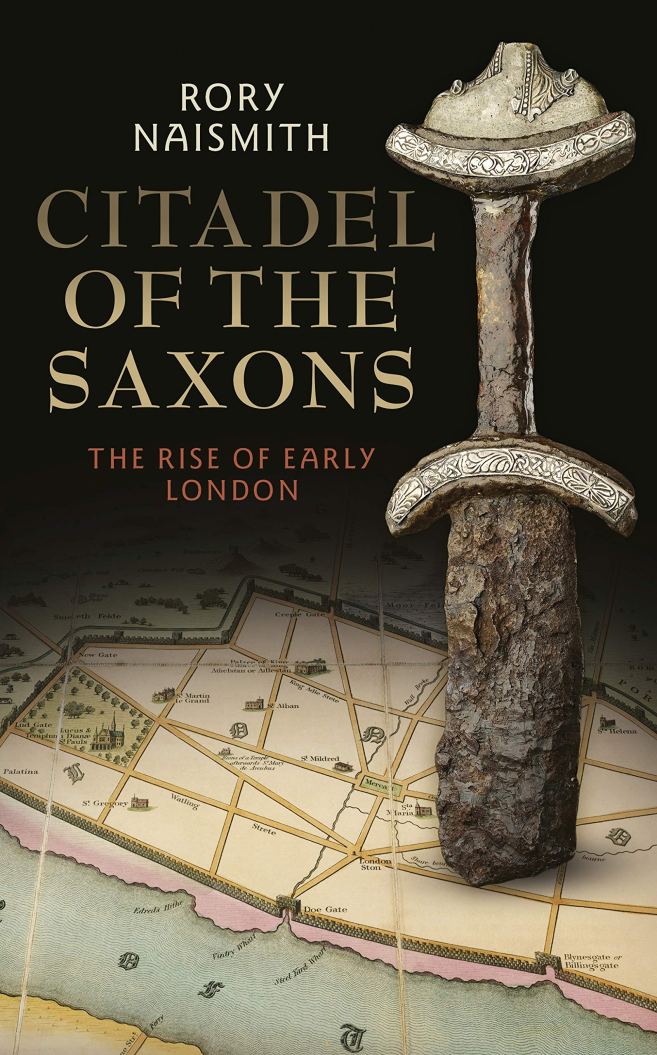 Alfred the Great and the Vikings;

London in the tenth century;

On this day in 1030, the Norwegian King Olav II was killed fighting the Danish Vikings at the Battle of Stiklestad.  A year later, he was canonised by the  English Bishop of Selsey, Grimkell or Grimketel (the local canonisation was later confirmed by Pope Alexander III in 1164).

In the later Middle Ages, Olav’s tomb, in the most northerly cathedral in Christendom, in Nidaros [Trondheim], became an important pilgrimage site, and the centre of a widespread “cult of Olav”. 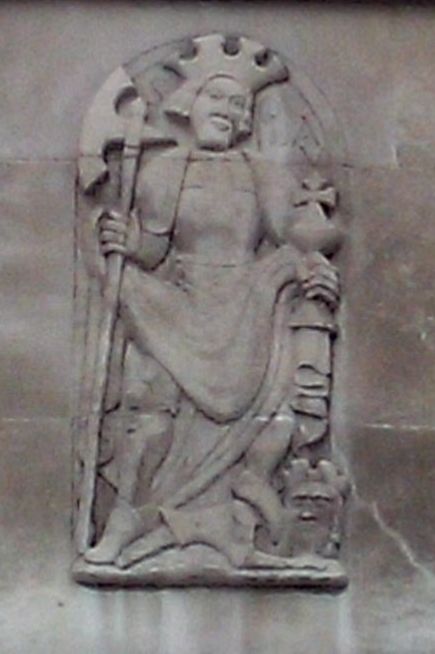 Interestingly, a  number of churches in and around the City of London are  dedicated to St Olav(e),  including  St Olave Hart Street (pictured, above) … 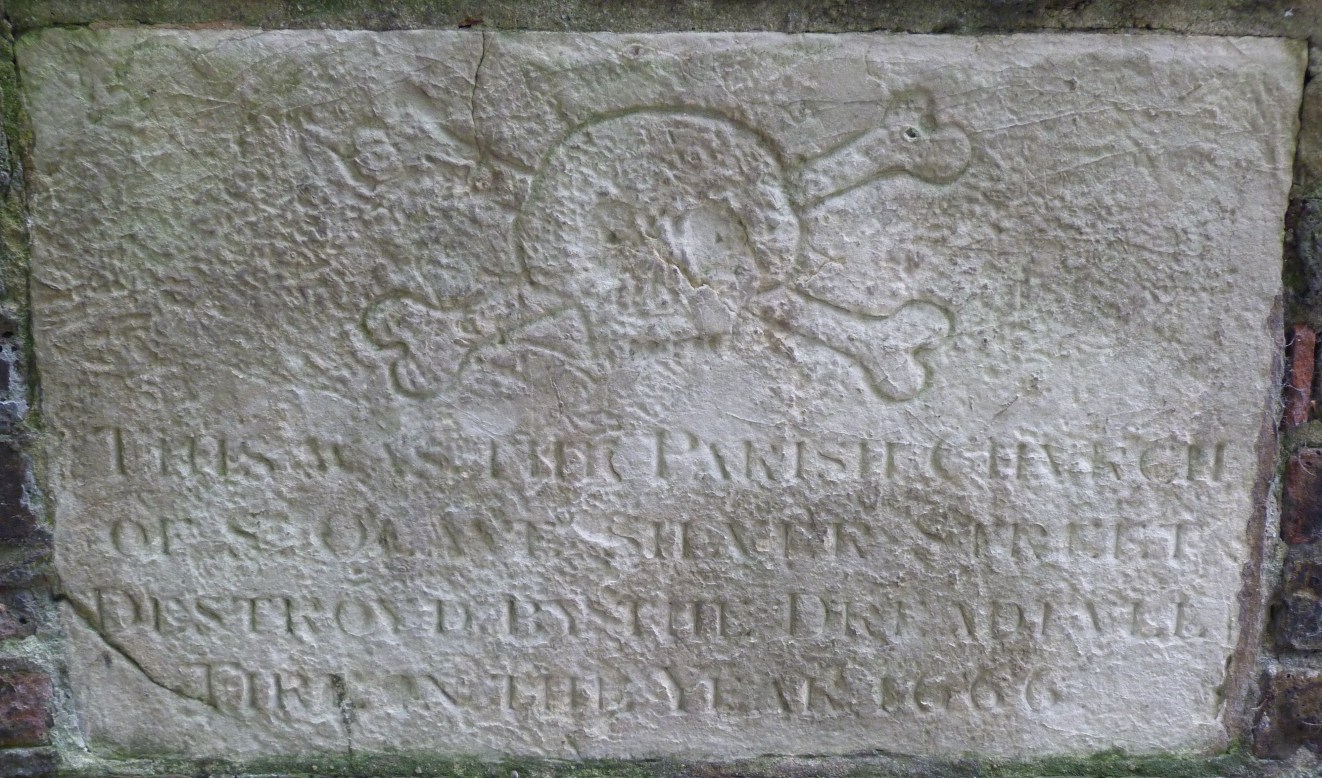 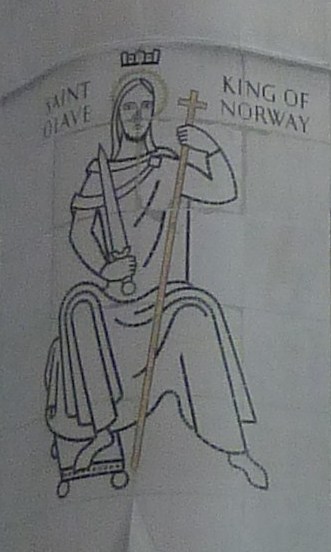 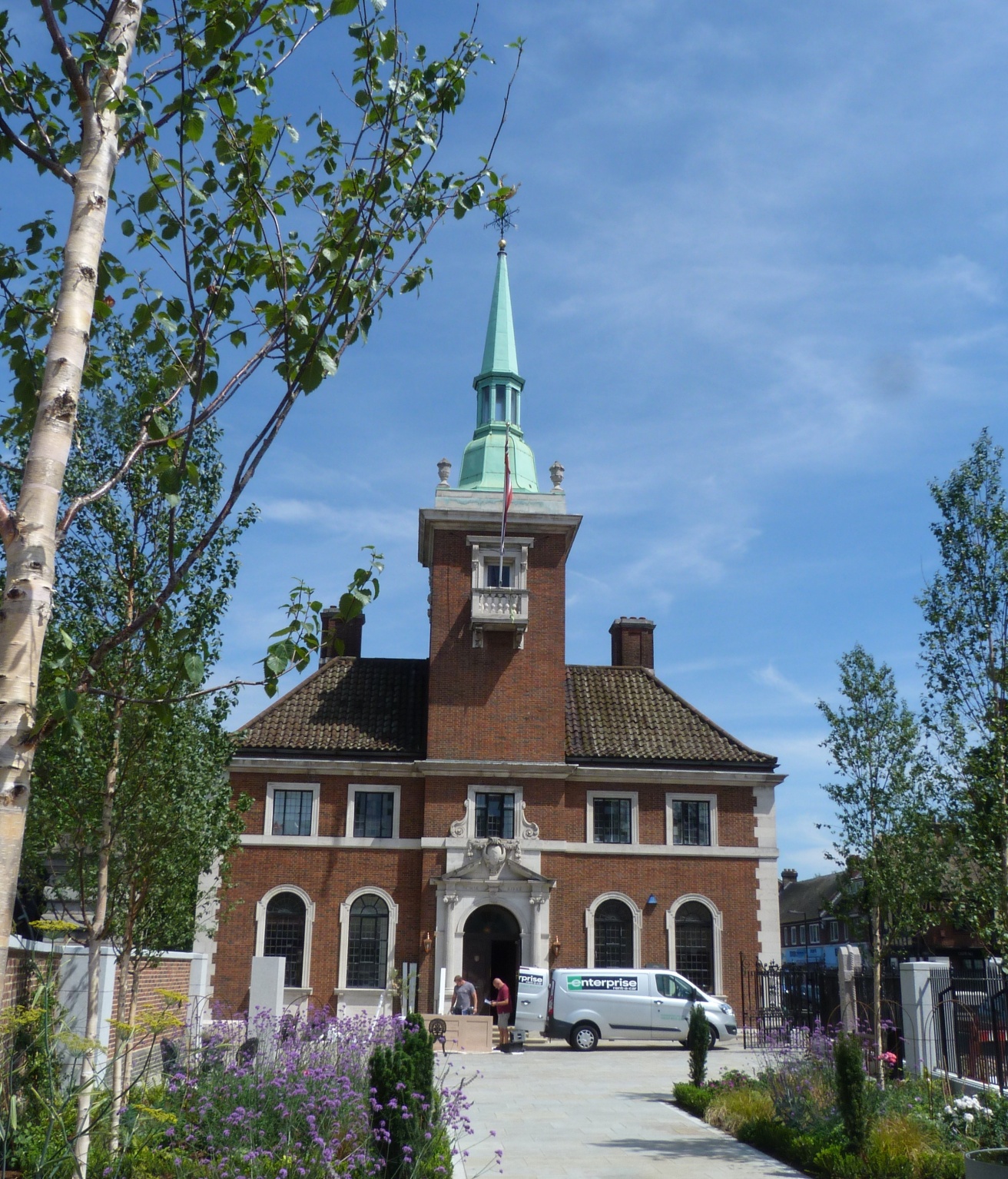 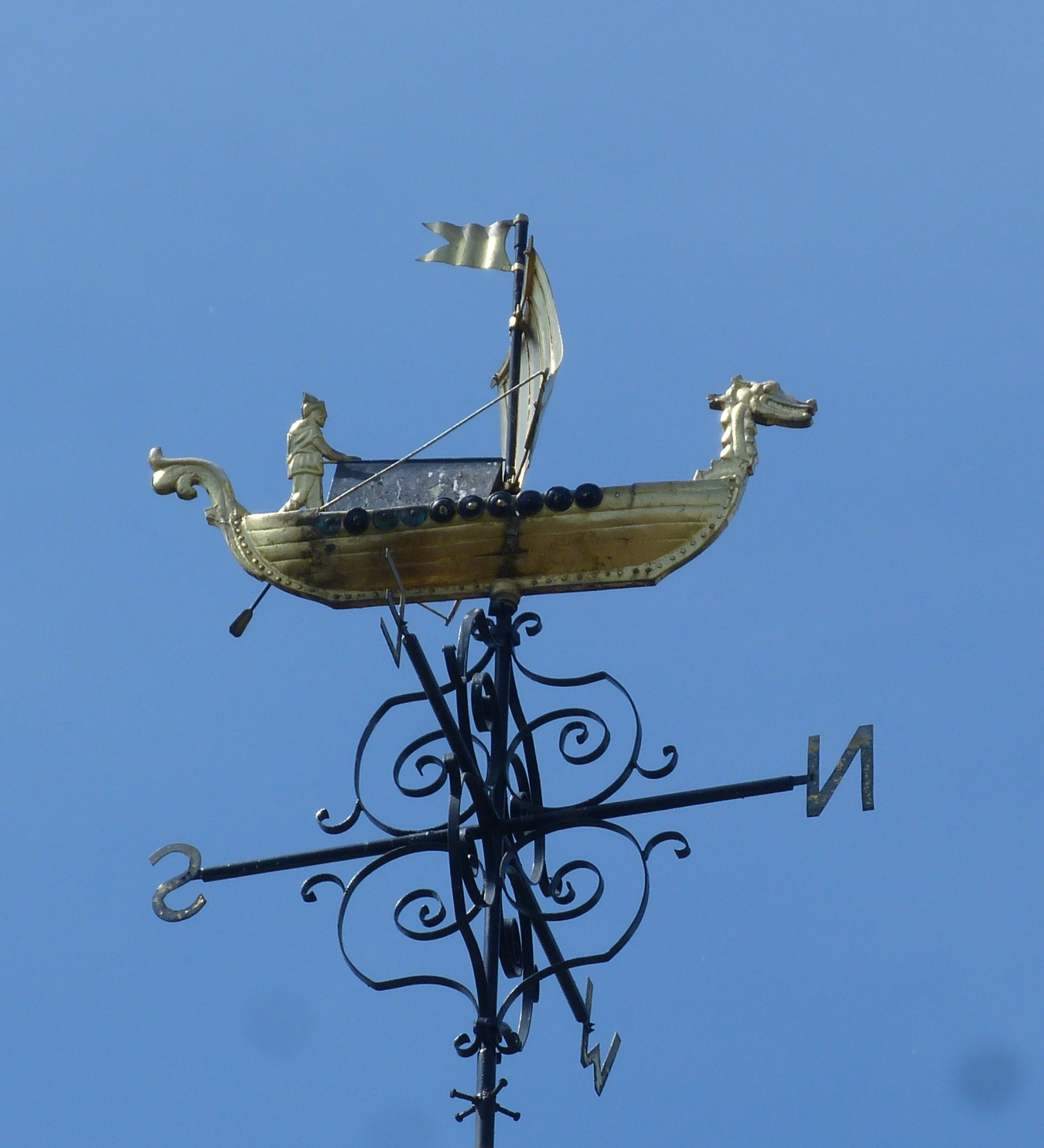 …  and St Olave in Rotherhithe.

This is because, in 1014, Olav Haraldsson, as he then was, was an ally of the Saxon English, under Ethelred “The Unready”, in their fight against the against the Viking Danish, under Cnut, and he helped relieve  Saxon London from Viking occupation  (albeit only temporarily).

According to the “Olaf Sagas”, he destroyed the Saxon incarnation of London Bridge, and the Viking army assembled on it poised to attack, by pulling it down with ropes tied to his long-boats.

The  court poet Ottar Svarte wrote, in the eleventh century, and Snorri Sturluson rewrote, in the thirteenth:

“London Bridge is broken down.

Many believe this to be the origin of the much-loved nursery-rhyme “London Bridge is falling down”. 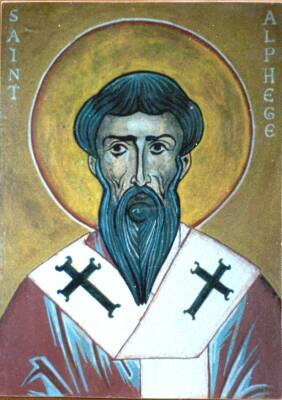 On this day in 1012, Elfeah, the Saxon Archbishop of Canterbury, was murdered by Vikings, who had held him hostage for some time and not received the ransom that they had demanded for his release. According to the Anglo-Saxon Chronicle, “they overwhelmed him with bones of horns of oxen; and one of them smote him with an axe-iron on the head; so that he sunk downwards with the blow; and his holy blood fell on the earth, whilst his sacred soul was sent to the realm of God”.  His last words were “the gold I give you is the Word of God”.  Elfeah’s body was laid to rest in St Paul’s Cathedral in London, and later, in 1023, moved by the then-Viking King, Cnut, to Canterbury Cathedral.  He was canonised in 1078. 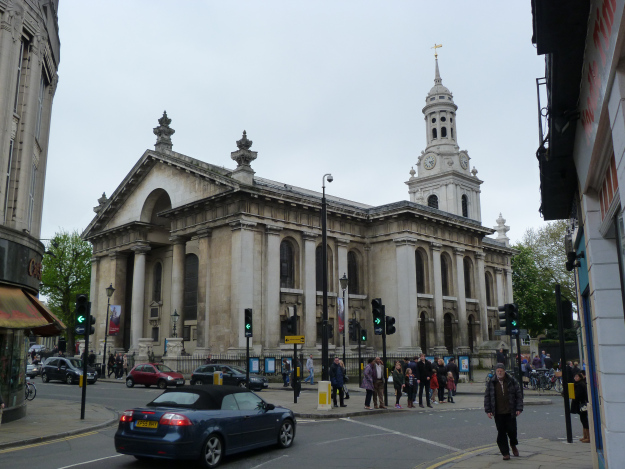 A church dedicated to him – St Alfege – stands on the spot where he was killed in Greenwich. 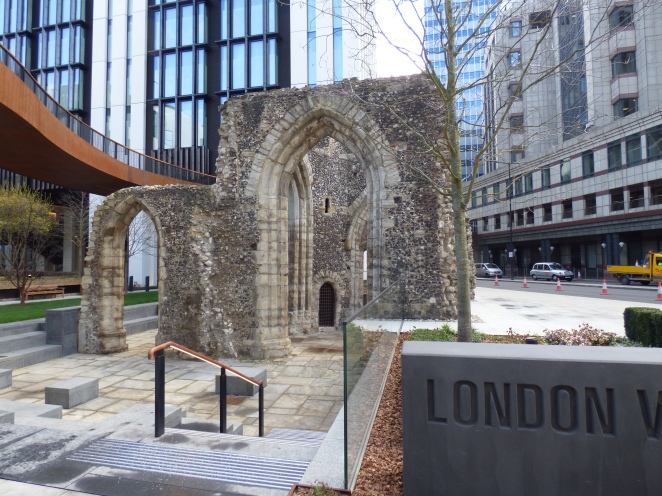 Another church dedicated to him – St Alphage – stands on London Wall. 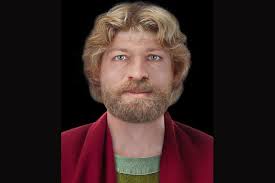 On this day in either 1117 or 1118 (sources differ), Magnus Erlendssen, the piously Christian Earl of Orkney, was murdered on the island of Egilsay. 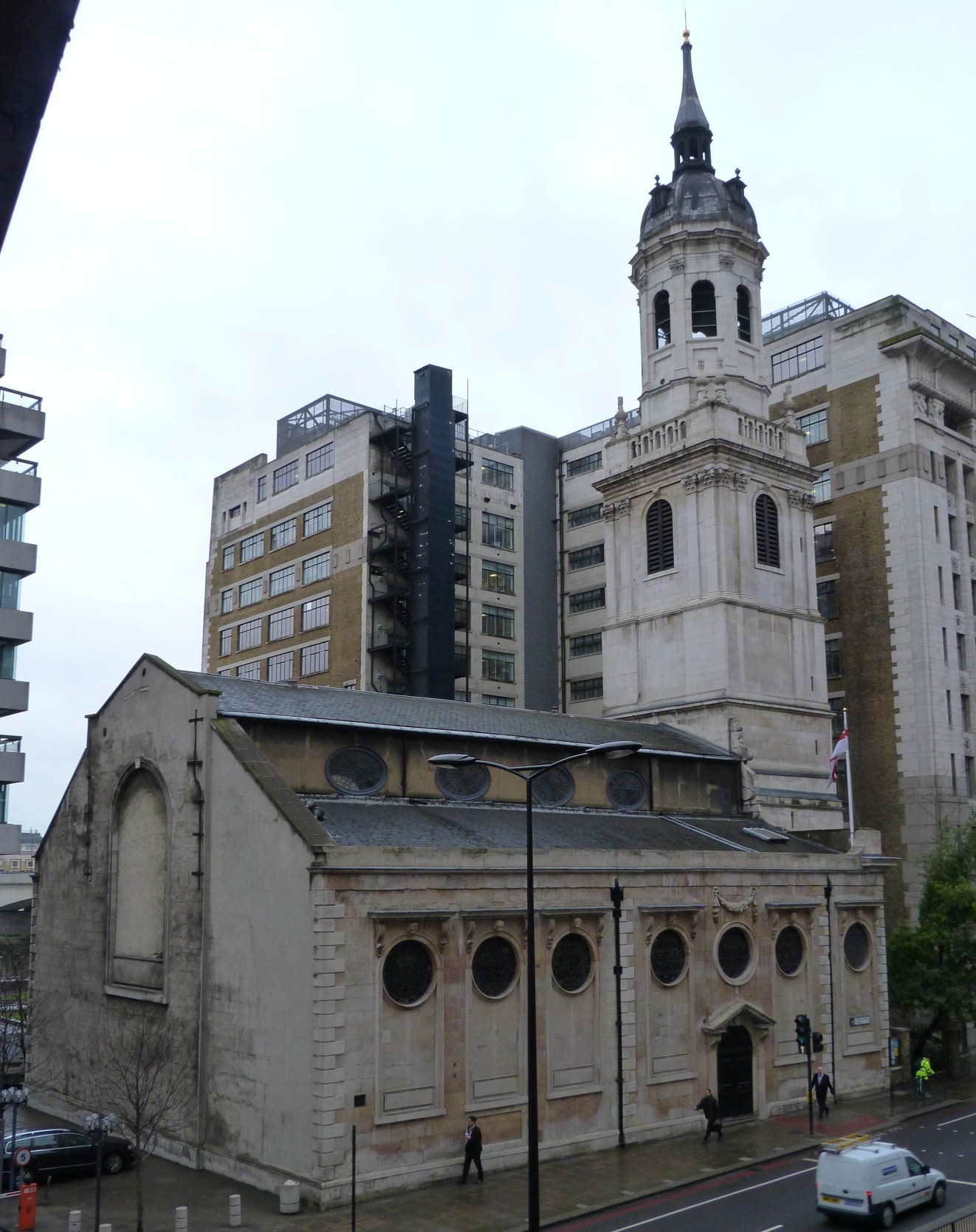 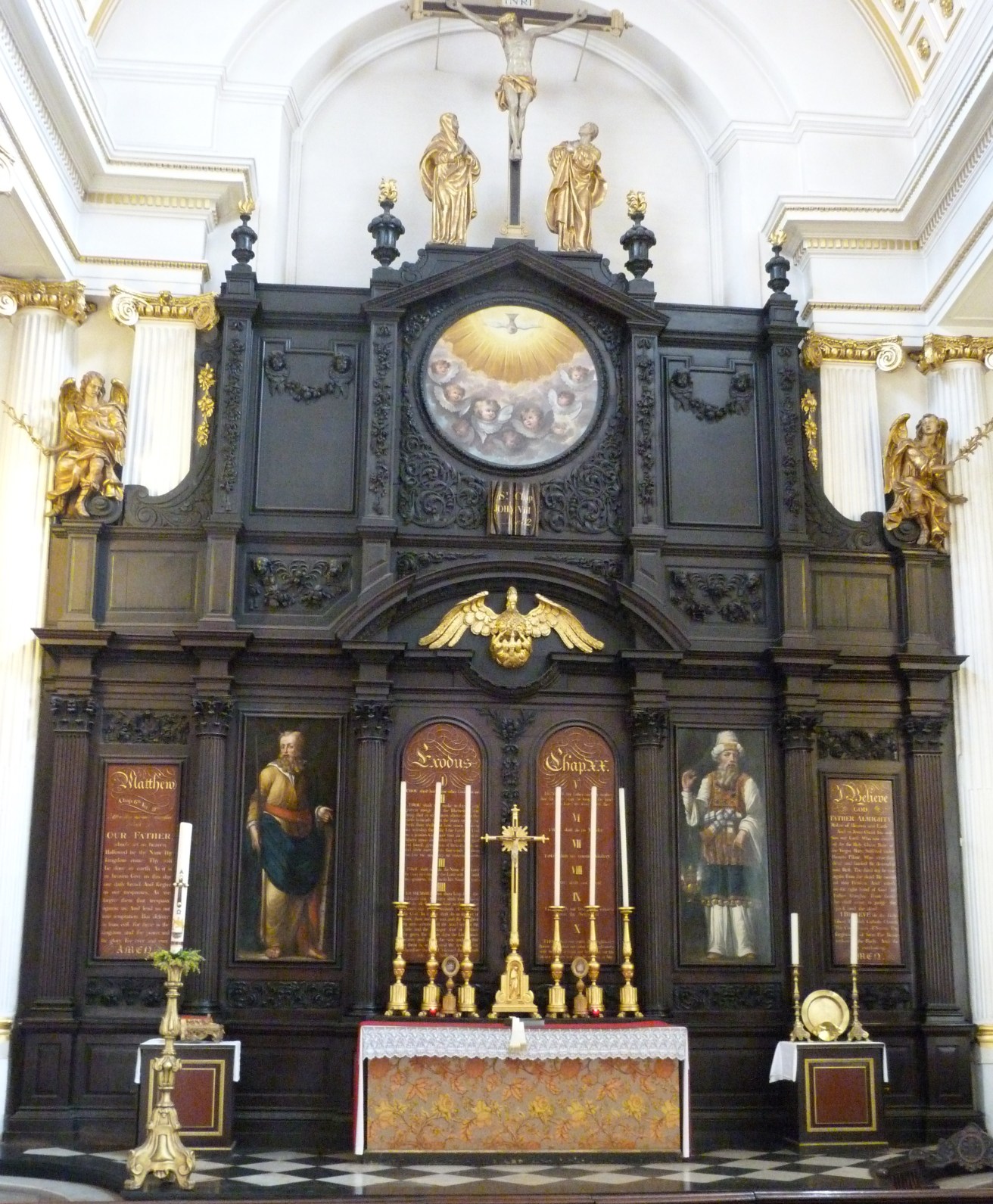 The City of London church dedicated to him was probably originally built in the twelfth century, sometime after his sanctification in  1135.  It was subsequently rebuilt by Christopher Wren between 1671-87, after having been burned down in the Great Fire of London in 1666, and despite eighteenth- to twentieth- century modifications and restorations  retains much of the  “inexplicable splendour of Ionian white and gold” alluded to by T.S. Eliot in his 1922 poem “The Waste Land”.

Miles Coverdale (1487-1569), who, with William Tyndale, published the first authorised version of the Bible in English in 1539, and who was church rector here between 1564-66, is buried here.  Henry Yevele (c. 1320-1400), who was the master mason to three successive kings, Edward III, Richard II and Henry IV, between c. 1360-1400, during which time he either built or rebuilt much of Westminster Abbey and the Palace of Westminster,  is also buried here. 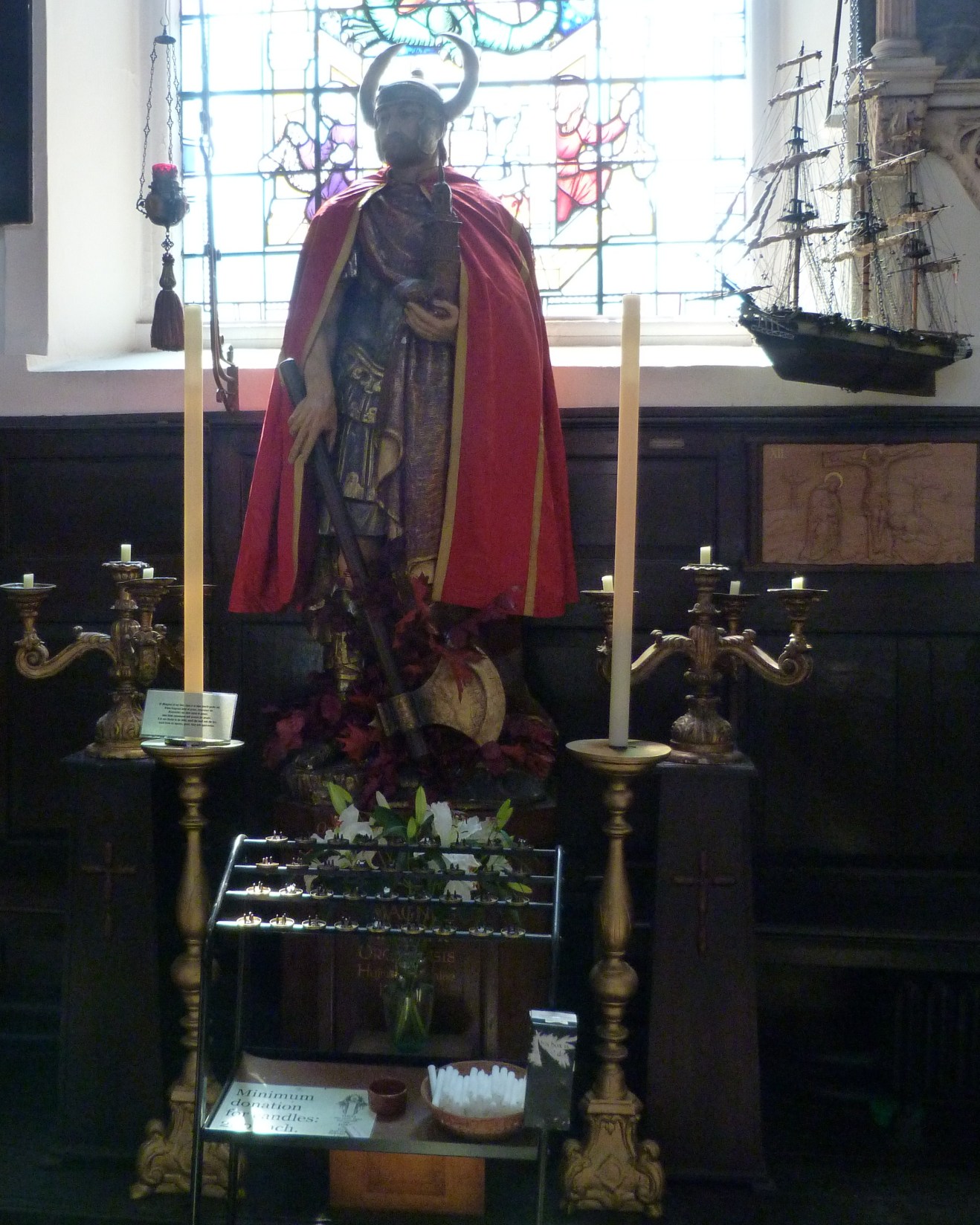 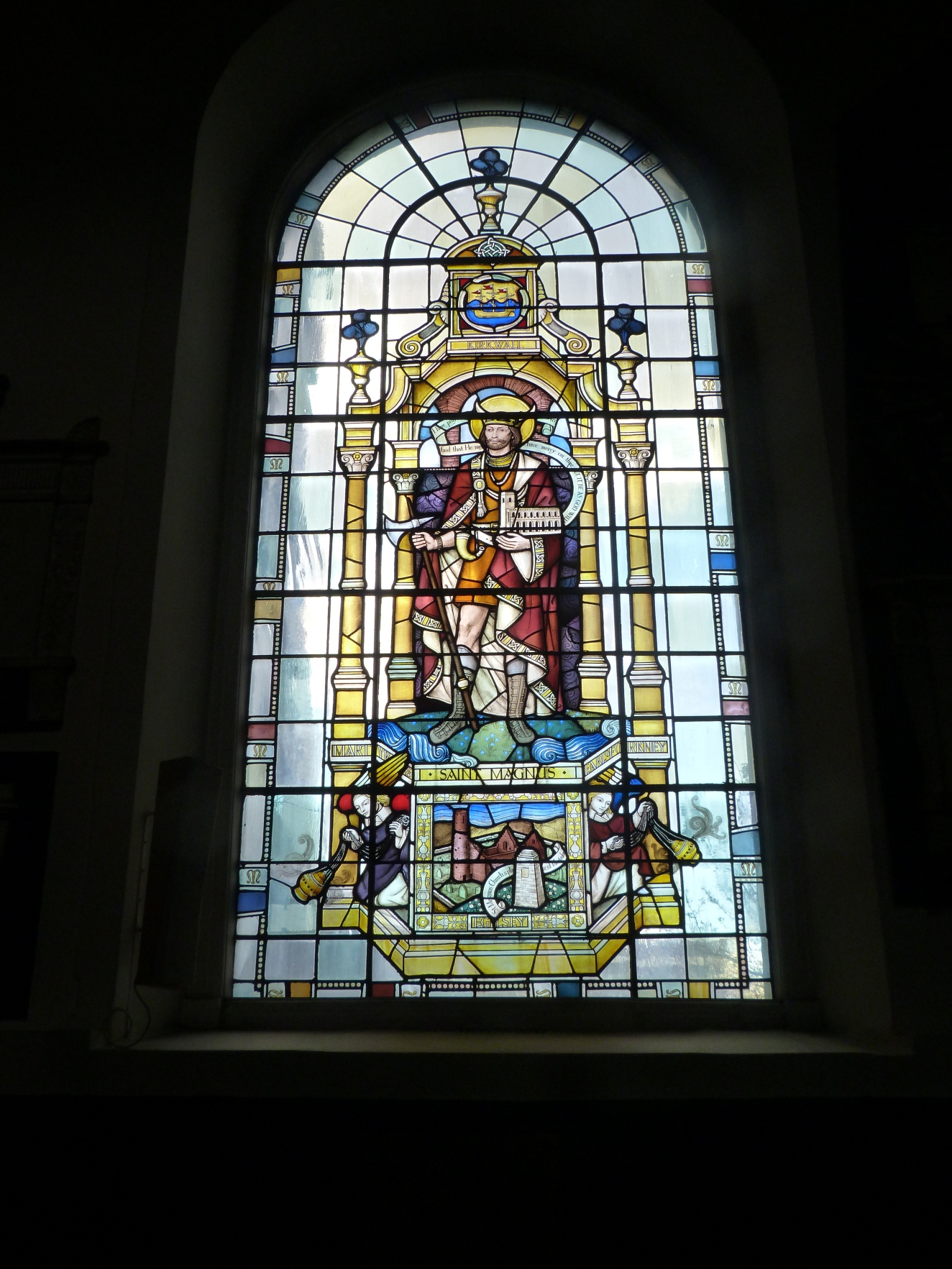 Among the many treasures inside the church are: a modern statue and stained-glass window depicting St Magnus in a horned Viking helmet … 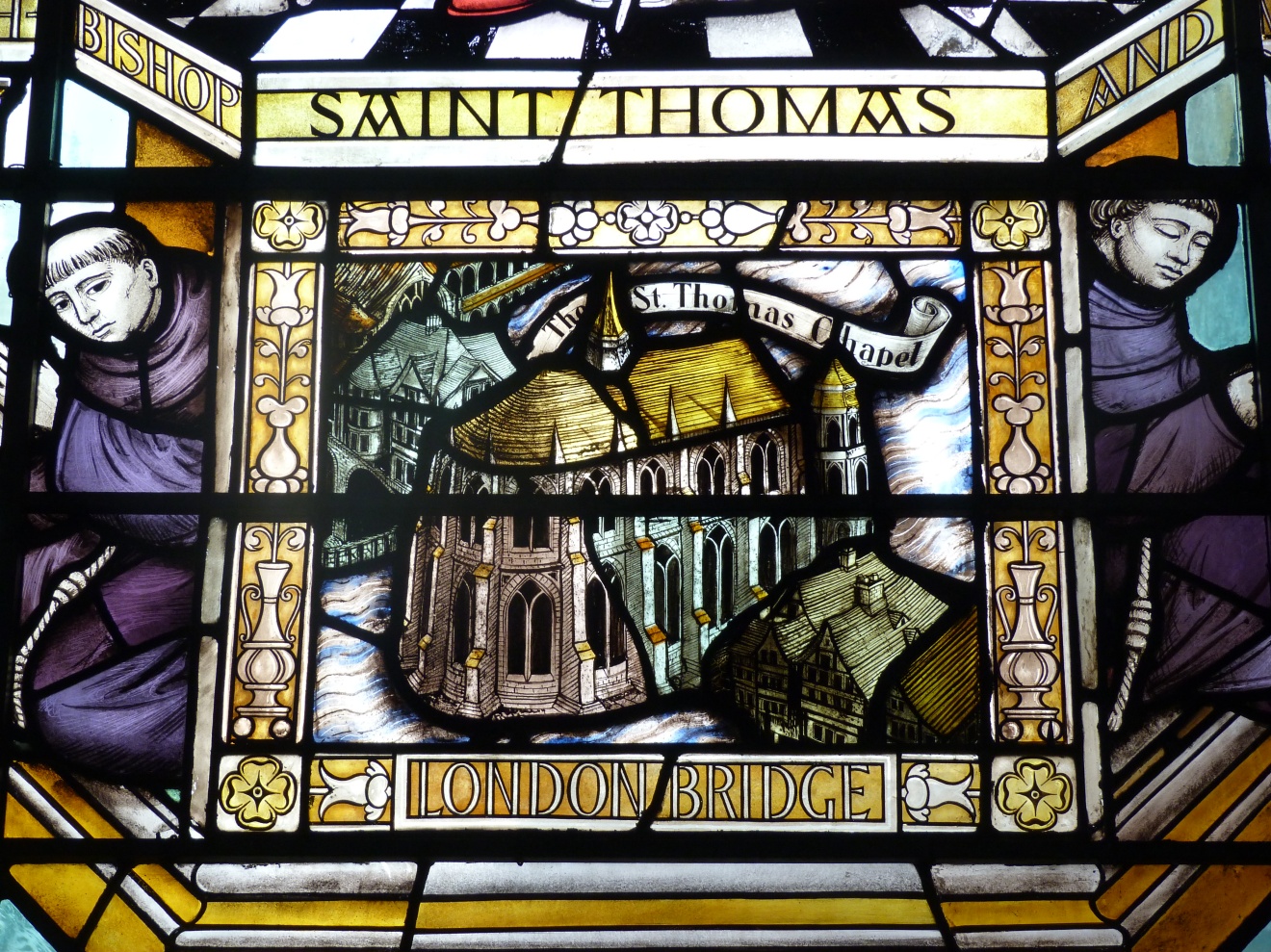 … further modern stained-glass windows depicting the churches of St Margaret New Fish Street and St Michael Crooked Lane, burned down in the Great Fire of 1666, and the chapel of St Thomas a Becket on Old London Bridge, demolished in 1831 … 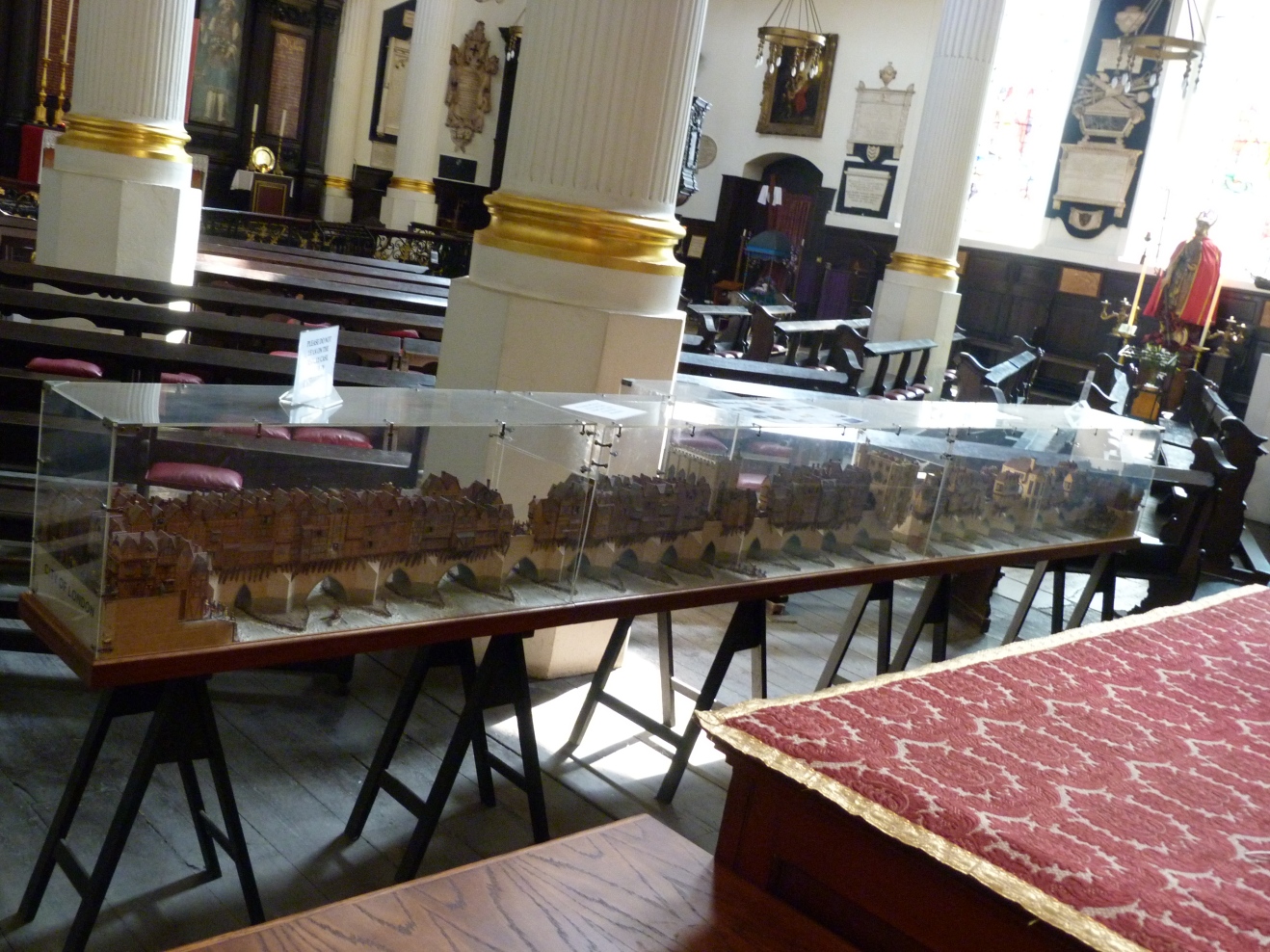 … and a modern scale-model of the bridge as it would have looked in its Medieval heyday. 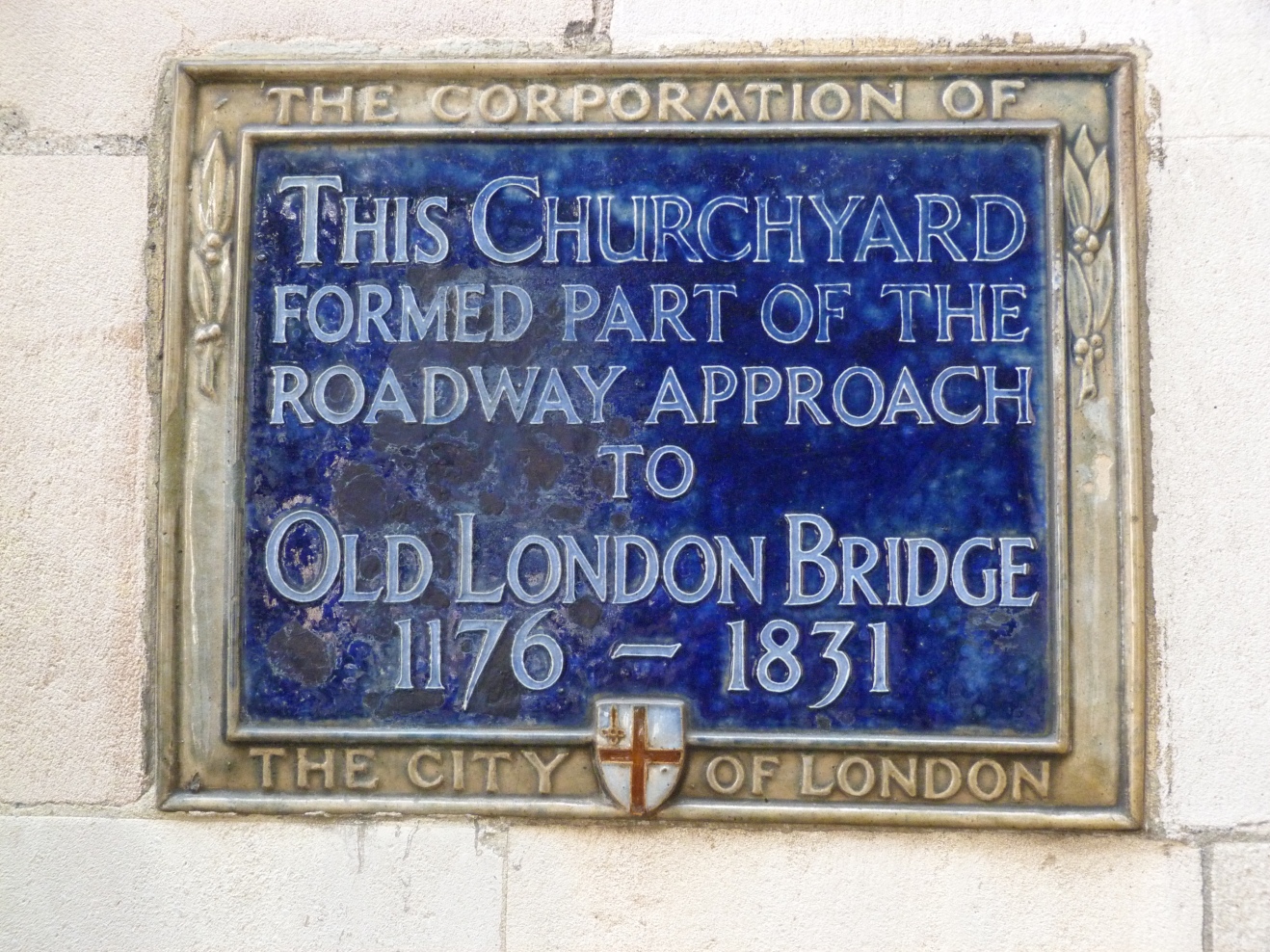 On the outside wall is a Corporation Blue Plaque marking the approach to the Old London Bridge, built between 1179-1206. 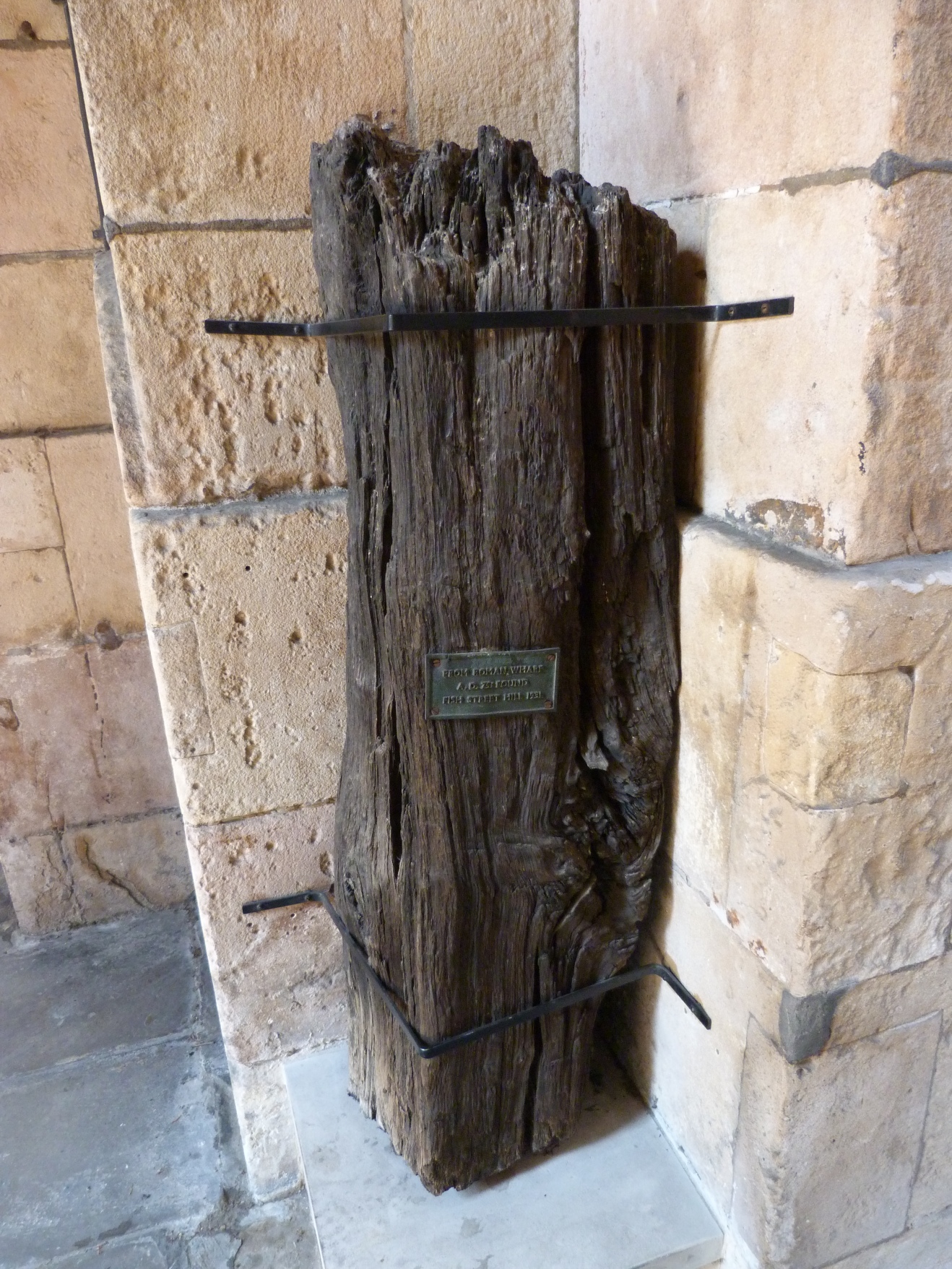 Nearby are some stones from the bridge, and a timber from the Roman wharf purporting to date to 78, but in fact recently shown on tree-ring evidence to date to 62, i.e., the year after the destruction of Roman Londinium during the Boudiccan Revolt.

In  1014, according to the “Olaf Sagas”, the Norwegian Olaf Haraldsson, an ally of the English King Ethelred II, “The Unready” in his fight against the Danish Vikings,  destroyed London Bridge and the Viking army assembled on it by pulling it down with ropes tied to his long-boats.

In 1225, Snorri Sturluson wrote an account of the event based on the “Olaf Sagas”, which reads (in translation) as follows:

Olaf, and the Northmen’s fleet with him, rowed … under the bridge, laid their cables around the piles which supported it, and then rowed off … as hard as they could down the stream.  … Now …  the piles being …  broken, the bridge gave way; and a great part of the men upon it fell into the river, and all the others … surrendered … , and took Ethelred to be their king.  So says Ottar Svarte:

‘London Bridge is broken down.

Detail from stained glass window below

Olaf went on to become King Olaf II of Norway in 1015, and Saint Olaf or Olav(e), to whom a number of London churches were to be dedicated, after he was martyred at the Battle of Stiklestad in 1030. 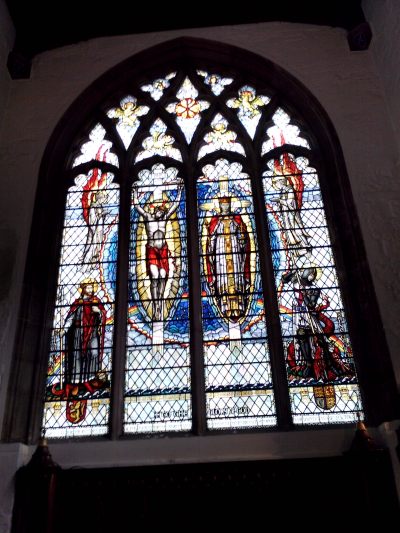 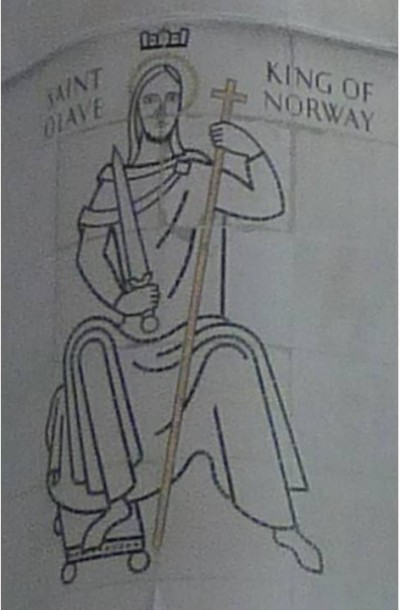 Mural on Site of church of St Olave, Southwark

Another in the occasional series on contemporary accounts of events in the history of London.

Early Anglo-Saxon London, or Lundenwic, which was situated immediately without the walls of the old  Roman city of Londinium, and to the west,  between Aldwych and Westminster,  became  subject to increasingly frequent and savage raids by the Vikings by the ninth century.  According to the “Anglo-Saxon Chronicle”, in 839, “… there was great slaughter in London … ”, and in 851, “ … came three hundred and fifty ships came into the mouth of the Thames; the crew of which went upon land, and stormed … London … ”.   Then, in or around 867, the city was actually captured and occupied by the Norsemen under Halfdere, who installed a garrison there (and a mint).  Its strategic significance was such that it was vital for the Anglo-Saxons to recapture it as soon as possible, to regain control of the Thames and its crossing points. 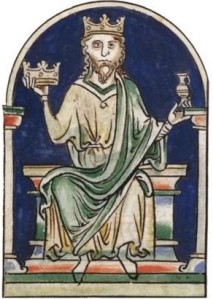 This they finally did under Alfred the Great in 886, when the Vikings were forced to withdraw to the east of the River Lea.  Again according to the “Anglo-Saxon Chronicle”: “In the same year, Alfred, King of the Anglo-Saxons … honourably rebuilt the city of London, and made it again habitable”.  He rebuilt the city  within the walls of the old Roman City of Londinium, renovating not only the walls but also the waterfront, and incidentally also setting out the street plan that still in essence survives to this day, centred on Cheapside and Eastcheap; and he renamed it Lundenburg.  He then gave his custody of the City, and command of its militia or burgwara, to his son-in-law Ethelred, Earl of Mercia “ … to which … all the Angles and Saxons … voluntarily turned and submitted themselves … ”. 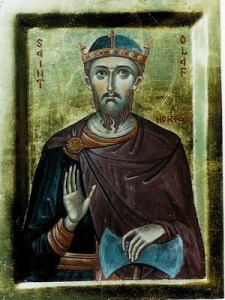 The raids continued, though.  In 994, “ … [the Norwegian] Olaf [Haraldsson] and [the Danish King] Swein [Sweyn Forkbeard] came into London on the Nativity of St Mary with 94 ships, and they proceeded to attack the city stoutly and wished also to set it on fire; but there they suffered more harm and injury than they ever thought any citizens would do to them.  But the holy Mother of God showed her mercy to the citizens on that day and saved them from their enemies”.  And in 1009,     “  … they …  took up winter quarters on the Thames, and lived off … the shires which were nearest, on both sides … , and …  attacked the borough of London”. 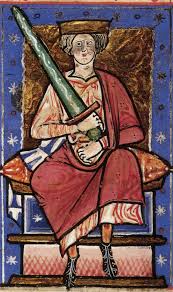 Then, in  1013, the city fell again to the Vikings, albeit again only temporarily, being retaken the following year by the English King Ethelred II, “the Unready”, in alliance with Olaf, who had previously sided with Sweyn (when, according to the “Olaf Sagas”, Olaf  destroyed London Bridge and the Viking army assembled on it by pulling it down with ropes tied to his long-boats).  Incidentally, Olaf went on to become King Olaf II of Norway in 1015, and Saint Olaf or Olav(e), to whom a number of London churches were to be dedicated, after he was martyred at the Battle of Stiklestad in 1030. 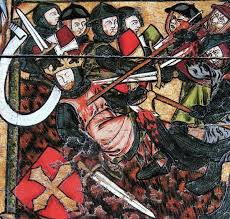 Finally, in 1016, the Viking Cnut, son of Sweyn Forkbeard, son of Harald Bluetooth, decisively defeated in battle Edmund II, “Ironside”,  to become King of England as well as Denmark.  Cnut was in turn succeeded by his sons Harold I, “Harefoot”, in 1035, and  Hardicanute, in  1040.   The Anglo-Saxon Edward “the Confessor”, the son of Ethelred II, “The Unready”, became King when the Viking Hardicanute died, leaving no heir, in 1043; and the ill-fated Harold II, in 1066.