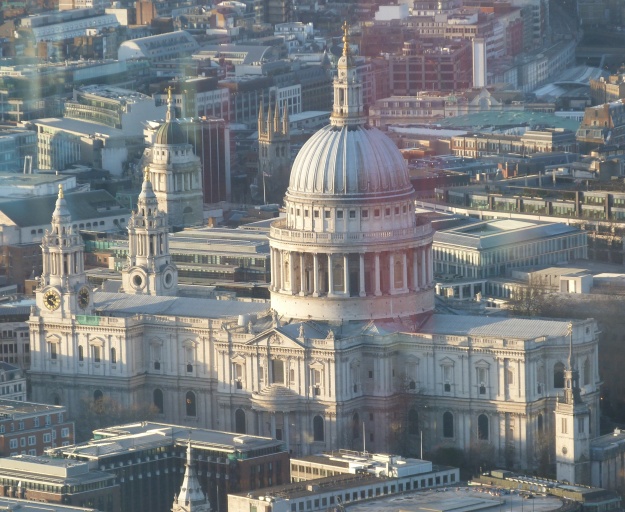 On this day in 1697 was held the first service in the present  St Paul’s Cathedral, at the time still in the process of being built by Sir Christopher Wren, after its immediate predecessor had been burnt down in the Great Fire of 1666 (*).  Building and repair work would continue until 1710, and the cathedral would only finally formally open on Christmas Day, December 25th, 1711..

There have been five  cathedrals on the site of the present St Paul’s.

The first was built  in 604, shortly  after the first Christian mission under St Augustine landed in Kent, by the King of Kent, Ethelburg, for the Bishop of London, Mellitus, and destroyed by fire in 675.

The fifth, present cathedral  was built in the Baroque style by Wren between 1675-1710.  It is faced in plain Portland Stone  (66000 tons of it, quarried in Dorset and  brought round the coast and up the Thames to London in barges), wonderfully reflective of the City’s light and mood.  It is crowned  with a glorious and iconic dome, making it unique among all the cathedrals of England.     The stone-work is by the Master Masons  Joshua Marshall and the brothers Edward and Thomas Strong and their team, overseen by Grinling Gibbons; the wood-work by the Master Carpenter John Langland and his team, also overseen by Grinling Gibbons; and the demi-grisaille paint-work inside  the dome by the Painter-Stainer James Thornhill and his team.  Wren’s simple epitaph inside the cathedral reads “Lector, si monumentum requiris, circumspice”, meaning “Reader, should you seek his memorial, look about you”.   On the pediment above  the  south door is a stone bearing  the image of a Phoenix rising from the ashes, together with  the inscription “Resurgam”, meaning “I shall rise again” (a different stone bearing the same inscription had happened to be found among  the smouldering ruins of the old  cathedral – a positive portent if ever there was one).

There are a great many important memorials in the interior of the cathedral.  The one in the south quire aisle to  the metaphysical poet John Donne (1572-1631) survived the Great Fire, although if you look carefully, you can still see scorch-marks around  its base!  The ones in the crypt to, among others, Nicholas Bacon (d. 1579), father of Francis, and Thomas Heneage (d. 1594), stepfather of Shakespeare’s patron Henry Wriothesley, Earl of Southampton, also survived the fire, although again not without a certain amount of charring!

(*) The service was one of thanksgiving for the end of the Nine Years War, also known as the War of the Grand Alliance or the War of the League of Augsburg, between France on the one side, and a coalition of European countries, including Britain, on the other.