St Christopher-le-Stocks was originally built around 1225, and added to in the sixteenth and early seventeenth centuries, badly damaged in the  Great Fire of 1666, and rebuilt by Wren, in 1669-71, using some surviving materials, and by Dickinson, in 1711-4, only to be demolished in 1781, to allow for improvements to the security  of the Bank of England after the previous year’s Gordon Riots, wherepon  the parish was merged with St Margaret Lothbury.

Only  parish boundary markers survive at its former site. 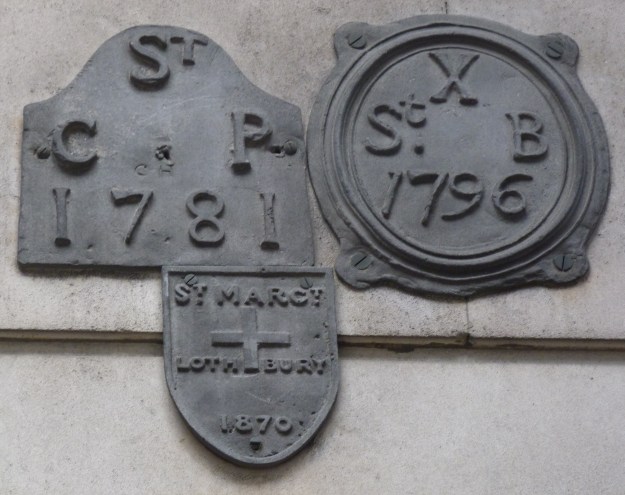 Some salvaged  interior fittings survive in St Margaret Lothbury, including the bronze head by Hubert le Sueur (who also made the equestrian statue of Charles I at Charing Cross), and the paintings of Moses and Aaron.   The salvaged reredos survives in St Vedast-alias-Foster (and the pulpit in St Nicholas  in Canewdon in Essex).   A thirteenth-century gravestone, discovered during the rebuilding of the Bank in 1934, can be seen in the Victoria and Albert Museum.