The right of Englishmen to trial by jury was  established in the late twelfth century, and  codified in the  Magna Carta in  the early thirteenth; and the right to legal counsel and representation, by attorneys (solicitors) and pleaders before court (barristers), at the turn of the  thirteenth and  fourteenth.

Formal training of pleaders before court, in the so-called Inns of Court,  strategically situated between the Cities of London to the east and Westminster to the west,  began in the fourteenth century.

The Inns of Court of the Inner and Middle Temple were founded in the early fourteenth century, on a site south of Fleet Street that had been occupied by the Knights Templar up until the time of their suppression in 1307.  No  Medieval buildings remain standing on the site today, although the post-Medieval Inner Temple Gate-House and  Middle Temple Hall do.

Gray’s Inn was founded in the late fourteenth century, on a site north and immediately south of High Holborn.  No   Medieval buildings remain standing on the site today, although the associated Barnard’s Inn Hall does, as does the associated post-Medieval Staple Inn Buildings.

The Founding of the United States of America

Historically, London’s Inns of Court played a formative, though little-known, role in the founding of the United States of America.   William Taft (1857-1930), the sometime Chief Justice and President of the United States, noted that “many of the law officers of the Colonies … , appointed by the Crown before the Revolution, were members of … [the Inns of Court]”, and that the Inns were thus instrumental in “instilling in the communities of the Colonies the principles of Common Law”.  Others have even suggested that the principles of secession also came from the Inns. 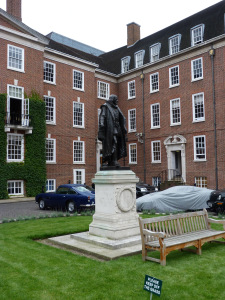 The famous lawyer, statesman, philosopher and “natural philosopher” (what we would now call a scientist), all-round Renaissance Man Francis Bacon (1561-1626) received his legal training in Gray’s Inn, and went on to become a “Master of the Bench”, or member of the governing body, there (among other things).  He was one of those instrumental in the creation of the first English colonies in the Americas in the early seventeenth century, and set out his egalitarian vision of how things should be there in his book “New Atlantis”.  The historian William Hepworth Dixon (1821-1879) considered Bacon one of the Founding Fathers  of the United States.   Thomas Jefferson    (1743-1826), one of the authors of the Declaration of Independence, and the third President of the United States, went as far as to describe Bacon as one of “the three greatest men that have ever lived, without any exception”.  Incidentally, both Francis and his father Nicholas Bacon, as sometime Lords Keeper of the Great Seal, once lived in York House, not far from  Whitehall.   Francis  also once  lived in Canonbury House in Islington. 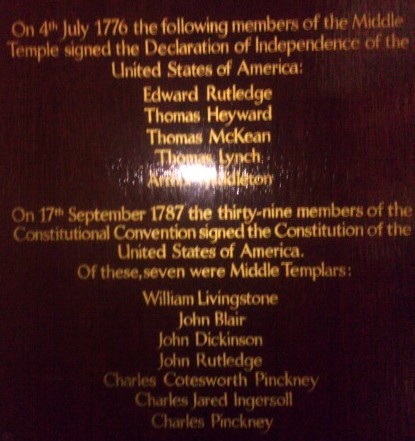 Another in the occasional series on contemporary accounts and descriptions of the historic City of London,  this one on the Medieval Inns of Court and Chancery, written by John Fortescue in 1470 …

“In England, laws are learned in three languages, namely English, French and Latin [and] not in universities, but in a certain public academy situated near the King’s courts [in Westminster].  That academy is not situated in the city, where the tumult could disturb the student’s quiet, but in a suburb.  There are in this academy ten lesser Inns of Chancery to each of [which] at least a hundred belong.  These students are for the most part young men learning the elements of the law, who, becoming proficient as they mature, are absorbed into the greater Inns of Court, of which there are four in number, and to the least of which belong 200 students or more.

[I]n these greater inns there can no student be maintained for less expenses by the year than 20 marks.  And if he have a servant to wait upon him, as most of them have, then so much the greater will his charges be.  Now by reason of these charges the children only of noble men do study the laws … .  For the poor and common sort of the people are not able to bear so great charges … and merchant men can seldom find in their hearts to hinder their merchandise with so great yearly expenses.  And thus it falleth out that there is scant any man found within the … laws, except he be a gentleman born … .

Wherefore they more than any other kind of men have a special regard to their nobility and to the preservation of their honour and fame.  And to speak uprightly there is in these greater  inns, yea and in the lesser too, beside the study of the laws, as it were an university or school of all commendable qualities requisite for noble men.  There they learn to sing, and to exercise themselves in all kinds of harmony.  There also they practise dancing, and other noble men’s pastimes, as they do which are brought up in the king’s house”.

An individual’s right to trial by jury was enshrined  in the Magna Carta in the reign of King John in the early thirteenth century, and that to legal counsel and representation in the form of an “attorney” (solicitor) and a “pleader” before court (barrister) in the reign of Edward I in the late thirteenth; and the Inns of Court were established in the fourteenth and fifteenth (Temple in the early fourteenth, Gray’s Inn in the late fourteenth, and Lincoln’s Inn, in its present location, in the fifteenth).

Only post-Medieval and later buildings survive in the modern Inns of Court. 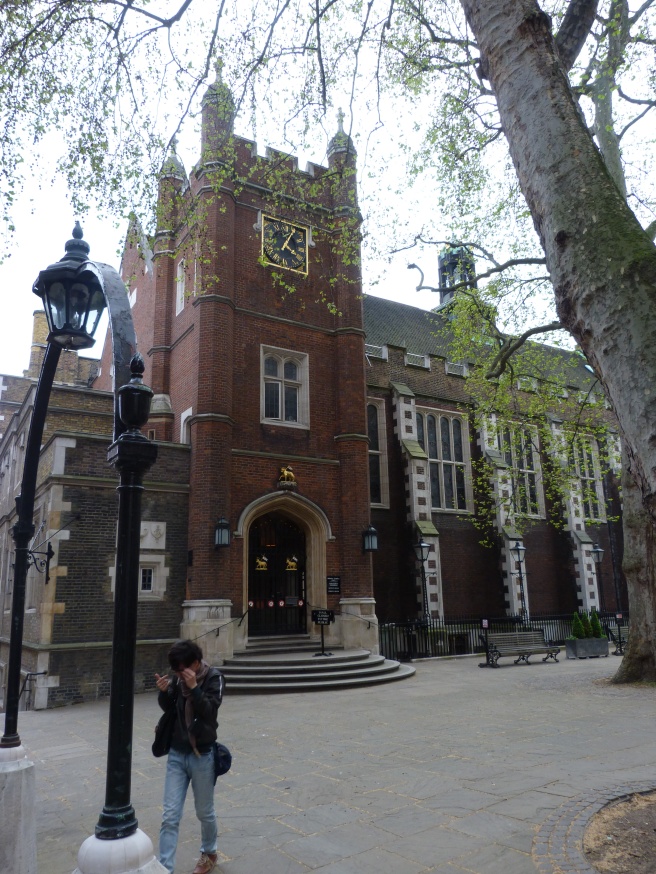 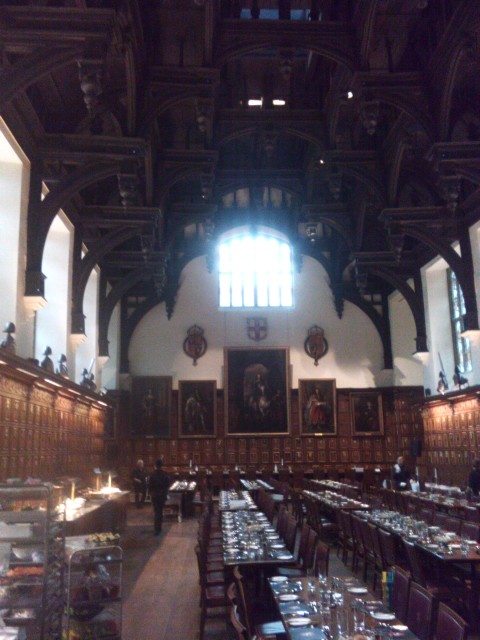 These include the Elizabethan Middle Temple Hall, where plays were and are performed for the entertainment of the Templars (Shakespeare’s “Twelfth Night” premiered here in 1602). 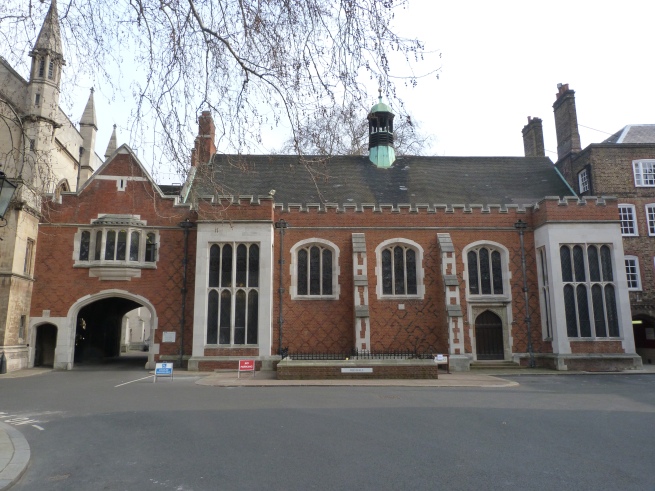 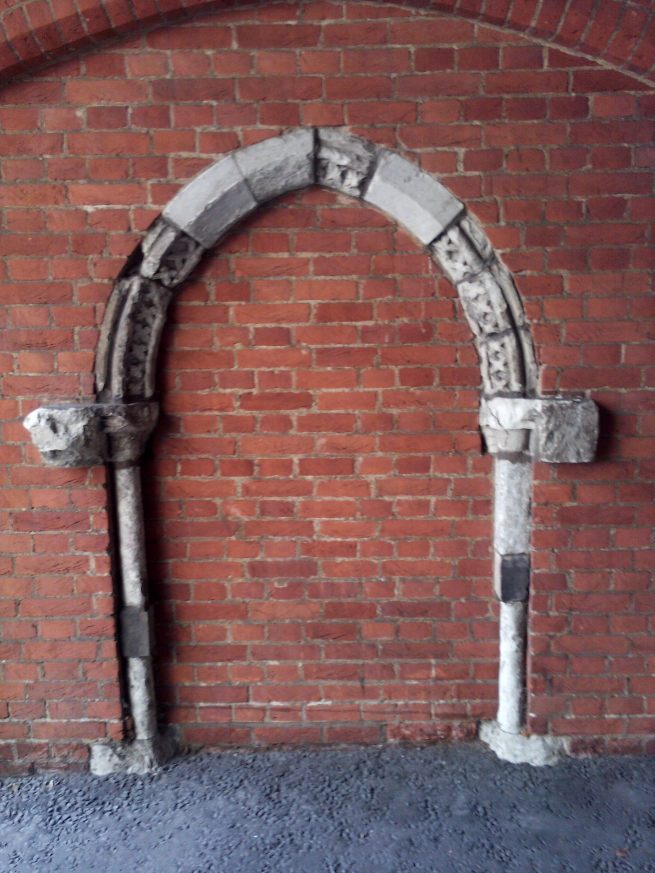 Note, though, that  Lincoln’s Inn Old Hall, which dates to the reign of the first Tudor King, Henry VII, incorporates into its construction a Gothic arch from an older, Medieval, building, very possibly  the thirteenth-century Bishop of Chichester’s House.

Today Bob discovered that it is difficult to hand around his laminated illustrations when his bare hands are numb with cold!

It really was horribly chilly today. Fortunately everyone was well wrapped up (apart from Bob’s hands, that is!)

– a helpful explanatory compass just outside Tower Hill station, giving a good preliminary over-view of the sights to come

– the Whitefriars monastery: tucked away where you’d never expect to find it!

-the Monument (some decided to make a return visit after the walk finished, to climb up to the top for the excellent views!)

– exploring inside the Inns of Court

Unfortunately the Roman Amphitheatre, under the Guildhall Art Gallery, was unexpectedly closed to visitors today, due to a rehearsal of some kind (not mentioned on their website – grrrrr!) Everyone strained for a glimpse through the glass doors to the Amphitheatre basement, and had to make do with that for today. Such a shame. Here’s hoping those on today’s walk will take the opportunity to make a return visit another time.

A running joke with today’s group was the plethora of vanished churches along the route – marked only by plaques or parish boundary markers. That’s the Great Fire for you – it really did wipe out a lot of buildings!

But various street names, many surviving from medieval times, did provide interesting glimpses of that long-gone London. For example, today’s group were interested to learn that Cannon Street’s name has nothing to do with artillery, stemming instead from the name of the local trade conducted there way back in 1183…. Any guesses?