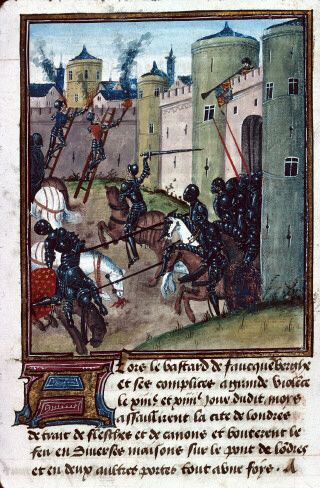 During “The Wars of the Roses”, between 1455-85, London was an important centre of political machination, and the Tower, the scene of a series of chilling politically motivated murders, in forgotten dreadful cubicles behind great locked doors.

There was also some actual action in the City; and indeed there were pitched battles on its outskirts, at St Alban’s in 1455 and 1461, and  at Barnet in 1471.

On May 14th, 1471, London’s  Yorkist garrison was bombarded and then assaulted, as the contemporary “Chronicle of London” put it, “on alle sydys”, by Lancastrian forces  under the privateer Thomas Nevill, illegitimate son of William Nevill, Lord Fauconberg, and otherwise known as the Bastard Fauconberg.  In response, the  Lord Mayor, John Stockton,  and his Sheriffs, John Crosby (*) and John Ward,  rode from gate to gate to rally the City’s  defences, “in alle haast with a Trumpett”.   And for the most part the defences held firm.  Aldgate came under the most sustained attack, “with mighty shott of hand Gunnys & sharp shott of arrowis”.  Indeed, some attackers even  managed to enter the City there, only to be held up by defenders under the Recorder of the City, Thomas Ursewyk, and an Alderman named John Basset, and then to be forced to retreat  by the arrival of defensive reinforcements from the Tower of London, “which dyscomffortid the Rebellys”.  The attack had failed, and the attackers who had evaded capture took to their ships, and sailed out to the safety of the Thames estuary.  Many  of those  who had been captured  were summarily executed, including Spysyng and Quyntyn.  And within days, Henry VI was apparently also done to death, on the orders of Edward IV, in the Tower.

(*) Crosby was later knighted for his role in the City’s defence.  His memorial in the church of St Helen Bishopsgate shows him in armour.

The church of St Helen Bishopsgate was originally built in the eleventh century, possibly around 1010, the  adjoining former Benedictine nunnery church in the thirteenth, around 1210, and still later rebuilds, additions and embellishments to the fourteenth through early seventeenth  (*).  It was undamaged by the Great Fire, although nonetheless requiring to be restored in 1893, only to be damaged by IRA bombs in 1992 and 1993,  and restored again in 1993-5. 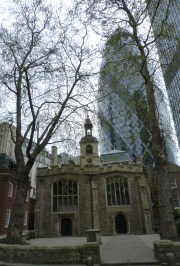 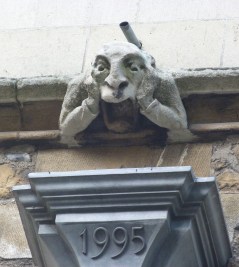 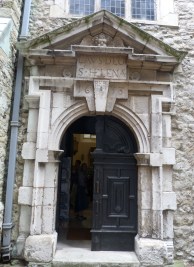 The exterior of the church is substantially surviving thirteenth-century, although  both  west front doors are later replacements, and the porch housing the south side door is much later, built, in the Renaissance style,  in 1633.   The construction of the church made use of much Roman dressed stone and tile, most likely sourced  either from a   Roman building  that once stood on the site, or from the city wall that once stood a short distance away.

The church is dubbed “The Westminster Abbey of the City” because of the beauty of its interior and the richness of its memorials. 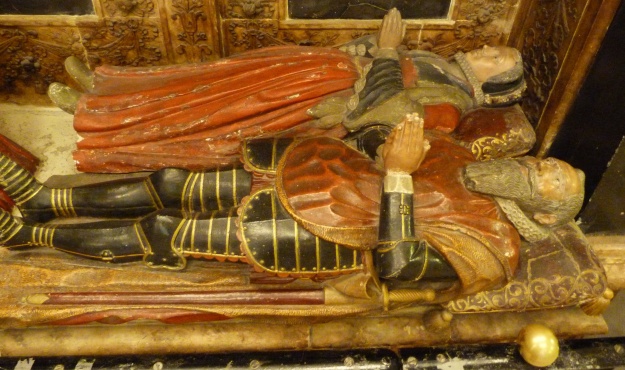 The alabaster effigies of Sir John de Oteswich and his wife, salvaged from the church of St Martin Outwich, date to the late fourteenth or early fifteenth century, and numerous other monuments to the fifteenth to seventeenth, including those of Sir John Crosby (d. 1476), Sir Thomas Gresham (d. 1579), and Martin Bond (d. 1643), together with some brasses with their “superstitious inscriptions” deliberately defaced by Puritans in 1644.  The arcade separating the former nuns’ quire from the nave dates to 1475; the nuns’ squint, built into the monument to Johane Alfrey, to 1525.  The carved wooden figure of a beggar supporting the poor-box,  the intricately carved and panelled  pulpit, and the south doorcase all date to the first half of the seventeenth century;  the inscribed wooden sword-rest to 1665.

(*) The nunnery was suppressed in 1538, whereupon the nunnery church was incorporated into the parish church, and the remaining nunnery buildings and land were given to Thomas Cromwell’s adopted son Richard Wyllyams, who sold them  to the Leathersellers’ Company.