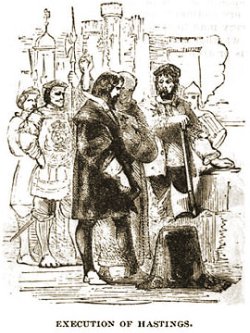 On this day in 1483, Lord Chamberlain Hastings was summarily beheaded in the Tower of London on the orders of the Duke of Gloucester, purportedly for plotting to kill him.  The death of Hastings removed one of the last obstacles standing between the ambitious Gloucester and the crown (Hastings having been  a supporter of the rival claimant, the recently deceased Edward IV’s son, also named Edward – one of the similarly ill-fated “Princes in the Tower”).  Gloucester was duly offered the crown in Baynard’s Castle on June 26th – becoming Richard III.

During “The Wars of the Roses”, between 1455-85, London was an important centre of political machination, and the Tower, at least according to legend, the scene of a series of chilling politically motivated murders, in forgotten dreadful cubicles behind great locked doors (*). 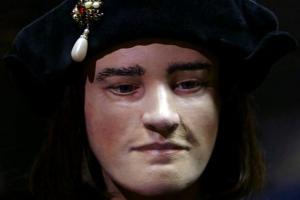 At least according to legend, on this day in 1478, Richard, Duke of Gloucester, who later went on to become Richard III, ordered the death in the Tower of London of his brother George, Duke of Clarence – by drowning in  a butt of Malmsey wine.