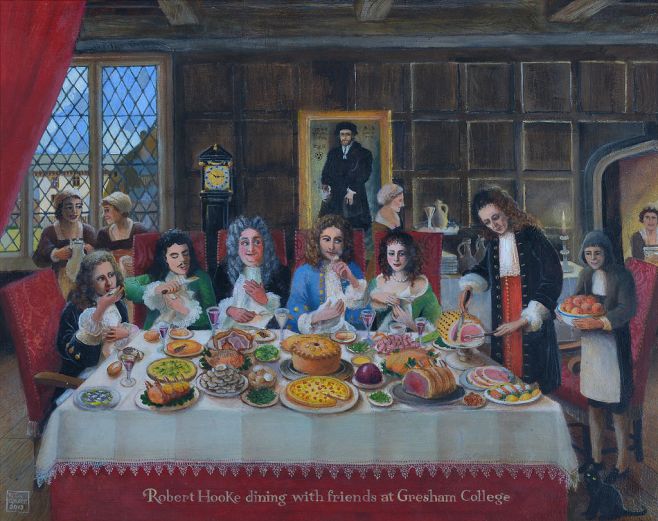 On this day in 1660 was founded the Royal Society of London for Improving Natural Knowledge, nowadays generally known simply as the Royal Society.  The purpose of the Society, according to its Charter, was and is “To improve the knowledge of all natural things, and all useful Arts, manufactures, Mechanick practises, Engines and Inventions by Experiments – (not meddling with Divinity, Metaphysics, Moralls, Politicks, Grammar [or spelling, presumably], Rhetorick or Logick)”.

The founder members of the Society included Christopher Wren, Robert Hooke, Robert Boyle, Robert Moray, John Wilkins, and William, Viscount Brouncker.   Christopher Wren was an architect and a  member of an aristocratic family who had finally found favour in the Restoration, after years in the wilderness during the Protectorate and Commonwealth.  He was also an anatomist and astronomer (one wonders whether he, like Sartre’s autodidact, acquired his learning by reading an encyclopaedia, starting with the letter “A”); a follower of the “New Philosophy” of Francis Bacon; and, in short, an archetypal (English) Renaissance Man.    Hooke was another architect, who worked alongside Wren on the reconstruction of London following the Great Fire of 1666.  He was also a pioneer microscopist and polymath, although curmudgeonly as well as brilliant, and memorably described by  Samuel Pepys as  “the most,  and promises the least, of any man in the world that I ever saw”.

The Society’s first meetings were held at Gresham College, founded by a bequest by the financier and philanthropist Thomas Gresham, on the site of his house on Bishopsgate (now occupied by Tower 42).   Available to it here was not only a  room for its meetings, but also a separate room for its anniversary elections, another for its Repository and Museum of Curiosities, a Gallery, and a Great Hall.  Meetings were temporarily suspended in 1665 on account of the outbreak of Plague, and then temporarily moved to Arundel House after the Great Fire of 1666, when  the business of Gresham’s Exchange (the Royal Exchange), which had been burnt down, was moved to Gresham College, which had survived.

“Before I went to bed I sat up till  two o’clock in my chamber reading of Mr Hooke’s Microscopicall Observations [Micrographia], the most  ingenious book that ever I read in my life”.

Robert Hooke was elsewhere memorably described by Pepys as  “the most,  and promises the least, of any man in the world that I ever saw”.  He was evidently a brilliant, but curmudgeonly, polymath: not only  a pioneer microscopist, but also one of the founder members of the Royal Society  in 1660, and an architect, who worked alongside Wren  on the reconstruction of London following the Great Fire of 1666 (*).

(*) Readers interested in further details of the life and works of this extraordinary man are referred to the biography entitled “The Curious Life of Robert Hooke … “ by the late Lisa Jardine, originally published by HarperCollins in 2003.