On this day in 1091, a tornado hit London, killing two persons and destroying 600 houses and the church of St Mary-le-Bow, also known as Bow Church, on Cheapside.  The church was virtually  levelled by the tornado, the force of which drove four 26’  rafters vertically into the ground (*). 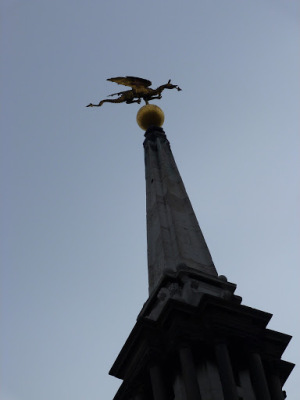 It was rebuilt, only to be substantially burnt down in the Great Fire of 1666, with only the crypt surviving, and subsequently rebuilt again by Christopher Wren.

There is a statue of Citizen and Cordwainer Captain John Smith (1580-1631) in Bow Churchyard, adjoining St Mary’s.  Smith sailed on the “Susan Constant” from Blackwall to found the first permanent English settlement in America, in  Jamestown, Virginia, in 1606, “from which began the overseas expansion of the English-speaking peoples” (a plaque on what is now Virginia Quay in Blackwall commemorates the event).    He is buried in the church of St Sepulchre, Newgate Street.  Incidentally, the  Algonquin  princess Pocahontas, who famously saved Smith’s life in America in 1607, visited London in  1616-17, with her by-then husband the tobacco planter John Rolfe, staying at the Bell Savage Inn off Ludgate Hill.  She died in Gravesend in 1617.

(*) From accounts of the damage, meteorologists estimate that the  tornado would have rated T8 on the T scale, which runs from T1 to T10, with winds in excess of  200 mph.