On this day in 1556, during the Counter-Reformation, some 20000 people gathered in Stratford to witness the burning at the stake by the Catholic Queen Mary Tudor of thirteen Protestants (eleven men and two women) accused of  heresy.

There is a memorial to the martyrs outside the church of St John in Stratford.

A number of Protestant heretics were also burned at the stake by Mary  in West Smithfield, many of whom were later buried in the nearby church of St James  in Clerkenwell.

There is a memorial to three of them, namely, John Bradford, John Philpot and John Rogers,  in West Smithfield … 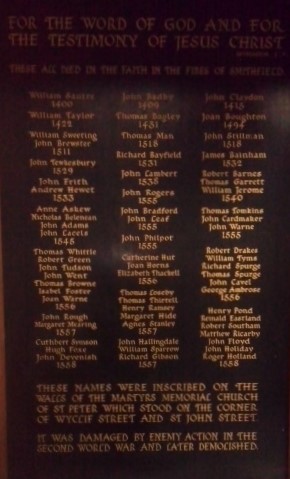 … and another in the church of St James in Clerkenwell.

John Foxe gives an account of the burning of Bradford in his “Book of Martyrs”, published in 1563, which reads as follows:

“ … When Bradford and Leaf came to the Stake … , they lay flat on their faces, praying to themselves the space of a minute of an hour.  Then one of the Sheriffs said … , Arise and make an end … .  At that word they both stood … and … Bradford took a Fagot in his hand, and kissed it, and so likewise the Stake.  … And so … Bradford went to the Stake: and holding up his hands, and casting his countenance to Heaven, he said thus, O England, England, repent thee of thy sins, repent thee of thy sins.  Beware of Idolatry, beware of false Antichrists, take heed they do not deceive you.  And … one of the Officers … made the fire … .  [And] Bradford … asked all the world forgiveness, and forgave all the world, and prayed the people to pray with him, and turned … unto the young man that suffered with him, and said, Be of good comfort Brother; for we shall have a merry Supper with the Lord this night: And so spake no more words that any man did hear … ”.

By way of balance, there are various memorials to Catholics executed by the Protestant Tudors in the Charterhouse and in the church of St Etheldreda in Holborn.  And there is another, near the site of the infamous “Tyburn Tree”, on Tyburn Convent.