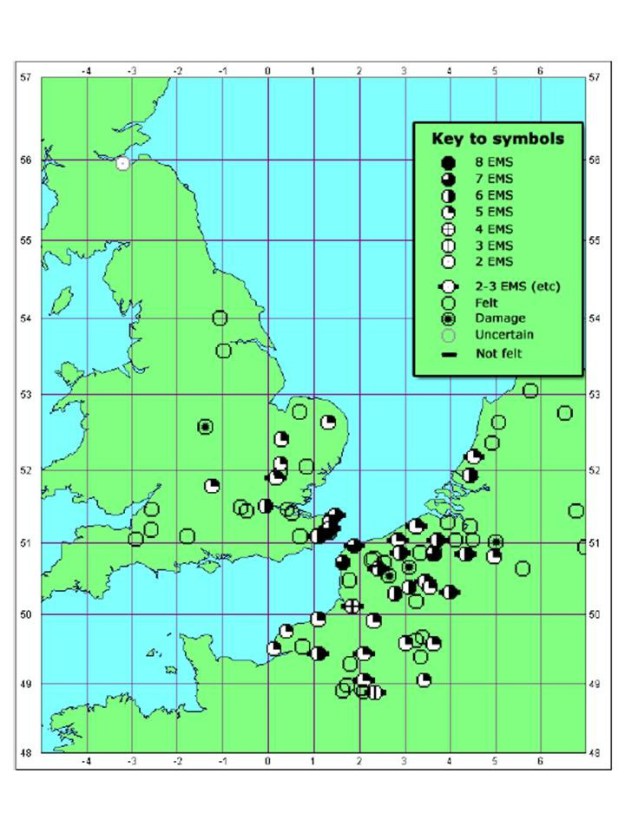 On this day in 1580 London was hit by an earthquake.  This one, estimated to have been of Magnitude 6 or more, and with an epicentre in the Straits of Dover, caused not only damage to property but also the deaths of two persons in London, the child-apprentices Thomas Gray and Mabel Everite, who were struck by masonry falling from the roof  of Christ Church, Newgate Street (the boy was killed outright; the girl died of her injuries a few days later).

A   number of contemporary publications  still survive that describe this earthquake, albeit as a supernatural rather than a natural  phenomenon, as a  divine warning and  call to repentance.  One, issued the day after the earthquake, contains “A godly newe ballat moving us to repent by ye example of ye earthquake happened in London ye 6. of Aprill 1580”, which reads, in part, as follows:

“It came at eve, as Aprill day
Shut up its water eye,
And fill’d all London with dismaye,
And that all suddenly.
In open streete
Did all men meete
Leaving their houses shaking fearfully.
The belles as of themselves did toll
The knell of all the people:
Huge stones fell downe, and others roll
From tower and from steeple.
These none could shun,
Though fast they run:
They soon o’ertooke and kill’d both whole and creeple.
In one short minute, strange to view,
The cittie stood amaz’d,
Confusion rang’d the wardes all through;
Eche on his neighbour gaz’d.
All were agast,
But soone it past:
If it continued, London had been raz’d”.